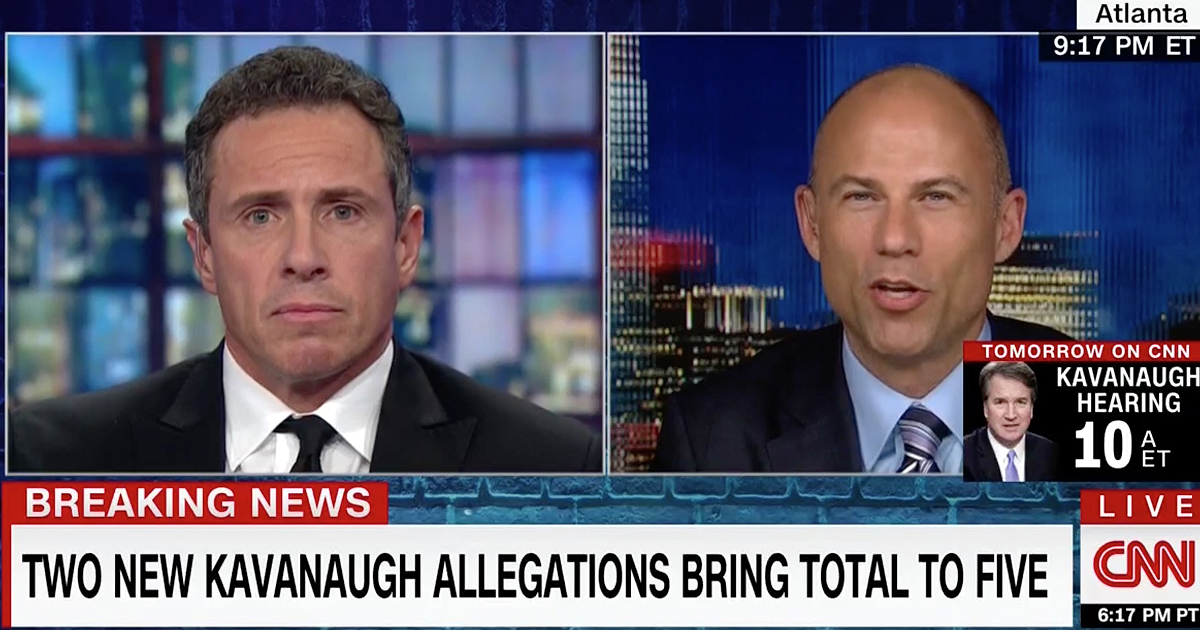 For anyone who has watched CNN in 2018, the idea of the network skipping a story featuring Stormy Daniels attorney Michael Avenatti, or even being dragged kicking and screaming to it rather than enthusiastically covering it in every hour, would have been unthinkable before last night.

But once news broke that the man who managed to make the Brett Kavanaugh hearings even less dignified had himself been arrested on charges of domestic assault — the network grew oddly reluctant to cover it.

Or in the case of one of the biggest Avenatti promoters Chris Cuomo, didn’t cover it at all.

Alisyn Camerota, who has interviewed Avenatti in the past and even expressed skepticism over some of the allegations he’s made, is a frequent on-air lecturer on feminism and #MeToo. She didn’t mention his name either Thursday morning, even while her co-host, John Berman, briefly reported Avenatti’s denial.

And we do mean briefly.

Not to mention late.

TMZ tweeted their story at 5:46 p.m. The first mention on CNN was by Erin Burnett, when she teased at the top of her show on Wednesday, at 7:01 p.m. In the intervening hour and 15 minutes, the AP confirmed the report, as did Fox News, Buzzfeed, and other news networks. Mediaite’s post went live at 5:59 pm. After Burnett teased it, her actual segment was at 7:41 pm. EST.

Later in the evening on Cuomo Prime Time, Chris Cuomo made no mention of the story, even as breaking news. Not that he is, in general, opposed to reporting stories that are just allegations, or even ones with no corroboration or even arrests made.

After Cuomo was Don Lemon‘s show, which mentioned Avenatti once, in the second hour at 11:29 p.m., for a 2-minute segment, which consisted in large part of his denial and comments from his wife, but nothing from police or the accuser.

On Thursday, after a brief mention on morning show New Day, the story was not reported on during CNN Newsroom with Poppy Harlow and Jim Sciutto, a two hour show.

Avenatti has been a fixture on CNN. During the Don Lemon segment they referred to him as a “household name.” His client, Stormy Daniels, and her allegations about Donald Trump have been a gigantic story for CNN. As judicial confirmation hearings took place on Capitol Hill, Avenatti and his other client, Julie Swetnick, accused Supreme Court Justice Brett Kavanaugh of participating in multiple gang rapes, another story CNN ran exhaustively.

Chris Cuomo, in particular, had Avenatti as a guest on his show over and over and over, particularly regarding allegations about Kavanaugh. These were allegations of sexual abuse, crimes against women by a man, and Avenatti was on Chris Cuomo’s show time after time on the topics of the abuse and mistreatment of women. He was held out as a defender of those women, representing them against men who did wrong to them. It would be natural and, moreover, responsible, for Chris Cuomo to therefore mention when that very person whom he himself had interviewed on this very topic was now under arrest for allegedly abusing a woman.

But he did not. And he avoided the topic on social media, too. And even after he was called out on Twitter by Matt Wolking as skipping the story, his only response was to troll a person who was replying to the thread, calling their “trash talk” weak.

Some of the weakest trash talk I have seen. https://t.co/MDDyehF5v8

Usually, Cuomo is more than happy to tweet about Avenatti.

The rest of the network, too, has avoided the story like the plague, despite the instances, too many to count, of holding Avenatti up as a representative of and defender of the rights of women, seeking his opinion and judgment on the alleged misconduct of other men, and reporting breathlessly and without delay every allegation he has offered to date toward Trump or Kavanaugh. They have even covered his tweets, his presidential aspirations, and even sought his “expertise” on other Trump-related topics like Michael Cohen.

A few breaking news mentions that were between thirty and fifty seconds were the bulk of CNN’s sparse mention of Avenatti. The anchors who did mention it themselves focused almost exclusively on his denials. And the lawyer’s biggest boosters on the network, like Chris Cuomo, didn’t bring it up at all.

Update: After this article was written (but prior to its publication), CNN’s Brianna Keilar spoke with S.E Cupp about Avenatti during the 1:00 p.m. airing of CNN Right Now — in a discussion which lasted about four and a half minutes.