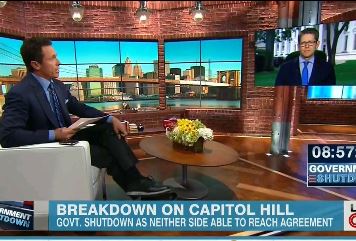 White House Press Secretary Jay Carney made the rounds Tuesday morning to get out the Obama administration’s message on the government shutdown, which is mainly that funding the government isn’t a concession, and not the proper vehicle to undo settled law. On CNN’s New Day, anchor Chris Cuomo maintained a detached devil’s advocate perspective while grilling Carney about the President’s refusal to negotiate on undercutting Obamacare, but faltered toward the end of the interview.

The mainstream media’s devotion to the “both sides” narrative has been sorely tested under the Republican attempt to un-lose a fight they lost fair and square, but so far, they are clinging stubbornly to it. When one of them deviates from the fetishistic neutrality that passes for objectivity, then, it stands out. Toward the end of a segment in which he tried to cajole Jay Carney into agreeing that the President should negotiate with Republicans under threat of government shutdown/default, anchor Chris Cuomo momentarily abandoned that neutral facade.

Wrapping up the interview, he told Carney “We’re hoping that, from a leadership perspective, (President Obama) opens the fist a little bit, starts reaching out his hand to the other side so we can avoid crisis.”

Carney stopped Cuomo in his tracks, protesting, “I can’t let you end that way. The President is ready to sit down with the Republicans, as he has all year long. He won’t let Republicans hold the American people hostage in return for their ideological demands. That would be irresponsible and the opposite of leadership.”

Even Republicans understand the consequences of the default that they’re steering into, so while there may be two sides to the Obamacare debate, there really is only one side to the default threat: it can’t be allowed. Negotiating under these circumstances is objectively foolhardy, as it would only serve to cause more crises in the future. Unfortunately, the mainstream media that we have would insist the President negotiate with Republicans on whether the sun should shine, which they would oppose if Obama was for it.