CNN’s Cuomo Confronts Cruz for Not Offering Obamacare Alternative: Isn’t That ‘What a Senator Does?’
VIDEO

CNN’s Cuomo Confronts Cruz for Not Offering Obamacare Alternative: Isn’t That ‘What a Senator Does?’ 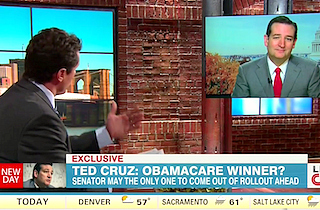 CNN host Chris Cuomo grilled Senator Ted Cruz (R-TX) on New Day Wednesday morning, challenging him to move beyond criticism of the Affordable Care Act and offer substantive solutions for the people he claimed were being negatively impacted by the bill—a confrontation Cruz did not appear to appreciate.

“How can we say it’s not working when it isn’t implemented yet?” Cuomo asked. “How can you say premiums are skyrocketing when they haven’t put the plans into effect yet? You’re being a little dangerous with how much political spin you put on something that’s so central to the wellbeing of so many families.”

“Well, I appreciate the adjective you tossed my way,” Cruz said. “You know, when I go back to Texas, I travel the state and I see people all the time who come up to me, men and women across Texas, and they grab me by the shoulder and they’re afraid. They say, ‘Ted, you know, I just lost my health insurance. I got a child with diabetes, I’m scared, please stop this from happening.'”

“What do you say to them, Senator?” Cuomo asked. “When they say, ‘Please help me,’ what is the fix that you offer them? I looked at the list of bills that you’ve sponsored. There’s not one that offers a solution to the current problems with health care except to get rid of the existing law. You don’t think you have a responsibility as a U.S. senator to do better than that in terms of offering a solution for what to do next?”

“I appreciate your trying to lecture me in the morning,” Cruz said.

“No, not all, Senator,” Cuomo said. “I’m worried, the same as you. Anybody who looks at the situation has worries…The problem is, I don’t have the power to fix it, you do. That’s what a U.S. senator does, is you sponsor law.”

Cruz finally offered allowing insurers to sell across state lines as a solution, and Cuomo pressed him on the other health care issues, like pre-existing conditions, lifetime caps, and more.

“I am not remotely forgetting about that,” Cruz replied, “but the tradeoff in this plan was in order to cover roughly 15 to 20 million people who don’t have insurance, which is about a third of the population that doesn’t have insurance, what Obamacare does is jeopardizes the health care of 200 million Americans who do have health insurance.”