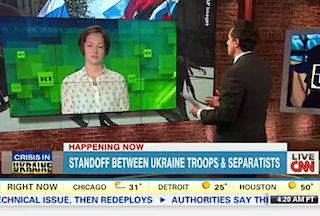 Tensions between the United States and Russia materialized in the media Wednesday when CNN’s Chris Cuomo took on Russia Today political correspondent Anissa Naouai over the escalating crisis in Ukraine. “There are two battles going on — there’s one on the ground and there’s one in the air,” Cuomo began. “And by that I mean in the media about what’s going on on the ground.”

Naouai agreed with Cuomo that the “media war is rampant” but that’s about all the two could agree on. “The rule of the game that’s been set up is basically that everything that comes out of Russia is automatically deemed Russian propaganda,” she lamented. “Everything that’s coming out of Kiev is automatically taken as fact.”

When Cuomo suggested that the “pro-Russian sympathizers” causing problems in Ukraine may be “thinly-masked Russian military,” Naouai said “There’s absolutely no evidence that those so-called masked infiltrators are Russian.”

Later in the interview, Naouai insisted that “Russia hasn’t invaded Ukraine,” adding, “I think it’s important to not misinform people that some kind of invasion is taking place at the moment. That is not happening.”

“What happened in Crimea?” Cuomo shot back. “When you look at Crimea, it’s hard to see something short of an invasion.” When she wouldn’t answer that question, he switched gears, arguing that “the U.S. is war weary” and therefore does not want to get involved in an “armed conflict” in the region as Naouai seemed to be suggesting.

“War weary?” she asked. “The U.S. spends more money on its military than the 16 biggest military budgets in the world. I wouldn’t call the U.S. military weary.” Going back to the Crimea question, Naouai maintained, “I don’t think it’s fair to label it invasion. That’s what the mainstream media did. I think it was misinformation.”

Ultimately, Cuomo admitted he could understand the points Naouai was trying to make, but added, “I think going forward we have to be very careful in seeing what is propaganda and what is in the influence of Russia versus just trying to give the benefit of the doubt to the unknown on the ground, because we all know the next couple of steps down the road could be very dangerous ones.”