CNN’s Cuomo Warns Protesters Before Curfew: ‘Be Careful, Because You Know How They Are’
video

CNN’s Cuomo Warns Protesters Before Curfew: ‘Be Careful, Because You Know How They Are’ 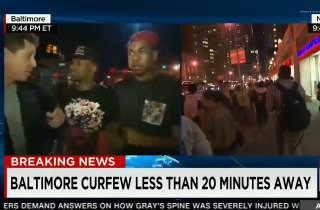 Shortly before Baltimore’s 10 p.m. curfew Wednesday evening, CNN’s Chris Cuomo was out among the protesters linking arms in the streets as riot police gathered nearby readying for the deadline. In a somewhat unusual moment, Cuomo warned some of the protesters to head home and “be careful” because of the strong potential for police clashes.

“Just be careful, ’cause you know how they are…” Cuomo warned the man.

“…if you seem like you’re being provocative towards them, you know how things can go,” the CNN anchor concluded.

CNN Commentary (a blog unaffiliated with the network) flagged the clip and asked whether this clip shows that reporter Cuomo openly “has an issue” with the Baltimore Police Department.

But one could argue his full quote simply suggests he was leveling with the protester — i.e., “you know how they are” means “you know what police are trained to do.” Which, indeed, many protesters understand well.

You can decide for yourself. Watch below, via CNN: