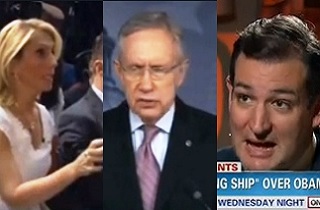 CNN’s Dana Bash made news when Senate Majority Leader Harry Reid (D-NV) chastised her for being “reckless and irresponsible” by suggesting that Democrats selectively fund programs during the government shutdown in order to “help one child who has cancer.”

On Sunday’s State of the Union, Bash abetted Sen. Ted Cruz (R-TX) in spreading a vicious conservative lie that emerged from that exchange.

In explaining how he thinks things could have gone differently for Republicans if the Senate GOP had stuck with him, Cruz told Bash that “one of the most revealing exchanges, and an exchange you were a part of, when you asked Harry Reid about the funding for NIH. When the government was shut down, the House passed 14 bills to fund vital government priorities. The Democrats objected to all of them. They sat on Harry Reid’s desk. Every one of them was a clean bill. So you had a bill to fund the veteran’s administration.”

“Their strategy won,” Bash interrupted. “They were successful. They beat you all back.”

“The question you asked Harry Reid about, if you could save one kid with cancer, wouldn’t you want to do that?” Cruz said. “And his answer, which was stunning, ‘Why would I want to do that? And then he attacked you personally.”

This is the point at which a respected reporter like Dana Bash takes a moment to replay the exchange in question, and corrects Cruz. “Actually,” Bash would say, “Sen. Reid was responding to Chuck Schumer, who, referring to others who were also suffering under the shutdown, said ‘Why pit one against the other?'”

Instead, though, Ms. Bash responded to Cruz’s smear this way: “Sorry, I’m a big girl.”

This was not simply a matter of interpretation, or even fairness, but a matter of record in which Dana Bash was directly involved. Ted Cruz has no duty to be fair or accurate, but Ms. Bash does, and she abdicated it by failing to correct him.