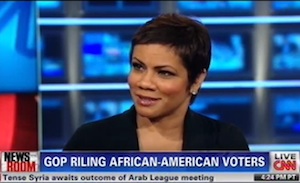 “There are people out there who will say that you and I are more sensitive because we happen to be African-American,” Lemon said to Taylor.

Lemon then played the clip of Rick Santorum explaining how he didn’t say he didn’t want to make “black peoples” lives better. The two gave a deadpanned paused, then completely cracked up.

“This is a result of running with scissors!” Taylor quipped.

Watch Lemon and Taylor criticize some of the GOP candidates on race issues below via CNN: