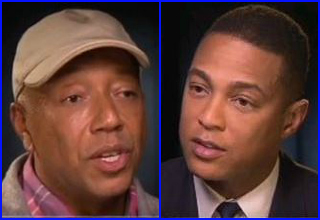 After talking past each other for several weeks, CNN’s Don Lemon and music mogul Russell Simmons finally came face to face and discussed Lemon’s controversial critique of the black community, and Simmons’ reaction to it. Simmons, who wrote a scathing open letter to Lemon, and Lemon, who delivered a lengthy response to that open letter on the air, hashed things out in a lively interview that aired on Saturday’s edition of CNN Newsroom.

It all started about a month ago, when CNN anchor Don Lemon created a stir by expounding on Fox News host Bill O’Reilly‘s assessment of the black community, and reaped a whirlwind ofcriticism in response. In particular, hip hop mogul Russell Simmons wrote several scathing tweets, and an open letter to Don Lemon. The heated reaction did not caused Don Lemon to shy away, as evidenced by his revisitation of the topic two weeks ago, when he responded at length to his critics, and directly challenged Simmons to face him on the air.

Russell Simmons took up that challenge this week, and sat down for an interview with Lemon to hash things out. He began by explaining his strong reaction to Lemon’s commentary.

so we are here. thank you for coming. “Sometimes, if a black person that’s revered in the community that says something that’s — conservative, ” he explained, “and I think is part of a mindset that is hurtful to the community, people will say the problem with the black community — kids have their ass crack showing. The problem with the black community is they need education opportunities and need job opportunities. These realities are the ones we immediate to bring up and we are talking about uplifting our children.”

“Here,” Simmons said. “I look inside. When i want to improve — here is what I learned…”

“No. this is too good,” Lemon interrupted. “Why didn’t you — why didn’t you write a letter that said — I understand what Don Lemon was saying? We need to take personal responsibility.”

“I should have said that first,” Simmons conceded, but added “You have to say things in a way they go in instead of bounce off. Personal responsibility, I wouldn’t include the cultural expression so much.”

Simmons then told Lemon that “The greatest course of the destruction of the fabric of black community has been the prison industrial complex,” and explained the cycle of incarceration and poverty that results from it. He also cited the “lack of education opportunity.”

“If we go school, and there’s no books and — teachers aren’t teaching, and the students are in a kind of situation where they don’t even have a gym class, they don’t have an art class,” he continued. “Without art, there is no way — you have to — exercise the creative muscles. That’s why we raise millions of dollar for the arts. Those are the kinds of things that we can do to change the condition that creates poetry and makes you uncomfortable.”

Lemon objected. “Don’t mistake my passion for not — that I don’t like hip-hop,” he said. “I think it is an art. I think people like Jay-Z and Kanye West are great artists. Kids are dying every single minute and it is because, as you said, we had the responsibility or there are people being educated in prison culture. I think that helps perpetuate that education in prison culture. And I don’t understand why you can’t see that.”

Simmons defended hip-hop’s raw depictions of reality as essential to the form. “I think each individual artist has a responsibility to say what’s on their hearts. And some of it is not pretty. So I think that there are reflections of our reality and some cases sad reality.”

Lemon asked how rap and hip-hop can be better, and Simmons replied, “Each individual can be better, but as an overall culture, it has to express our sad reality.”

Lemon cut to the chase, asking “Is there a way of doing that without calling someone a bitch or a whore?”

“I think some of the lyrics are very harsh, and some of the things they say are very sexist and difficult to digest,” Simmons said.

“And ignorant,” Simmons agreed, but added “I can’t tell a poet what to say, and I will not.”

Lemon reiterated his love of hip-hop, but also that “I want young black men, especially the people being killed, to be better, the industry to be better. That’s it.”

They concluded by promising an ongoing conversation, and Simmons told Lemon “What you’ve been doing is giving what you can, and your intentions are good, and I respect you for it.”

Here’s the full interview, from CNN: