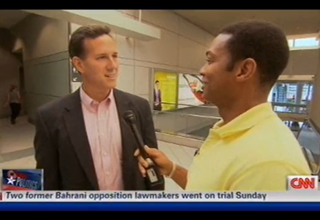 2012 Republican candidate Rick Santorum‘s biggest hurdle, many argue, in a general election would be his strident social conservatism, including opposition to abortion in any situation and gay marriage. Given his background, a question like the one CNN anchor Don Lemon pitched him last night was inevitable, as was his answer: in response to whether he had gay friends, Santorum responded “yeah! In fact, I’ve had gay people work for me.”

Santorum, who has said he believes there is no constitutional right to gay relations (contrary to, among several Supreme Court cases, Lawrence v. Texas) and that, should there exist that right, rights to incest and adultery would follow, nonetheless told Lemon that he indeed have gay friends when the question was pitched directly to him. The interview had already been heading in that direction, as Lemon asked him to respond to criticism that he was “hateful” (answer: “I am called by my faith to love everyone”). Santorum did specify that, besides working for him, he did also have friends– though given his policy positions, the former actually seems a bit more unlikely. He noted he had been with gay friends “just two days ago” and that, while “they differ from me,” “they know that I love them because they’re my friend.” He added that he discussed his position about their orientations openly with them and that they did not mind.

Don Lemon joked that the headline of the soundbite should be “Rick Santorum Has Gay Friend,” to which Santorum replied “I don’t know what the shock value is here!” The moment proves to cement the fact that Santorum seemed to lack an understanding for why his previous comments on homosexuality would alienate gay people.