CNN’s Don Lemon In Twitter War With Actor Jonah Hill: He ‘Treated Me Like The Help’
Video 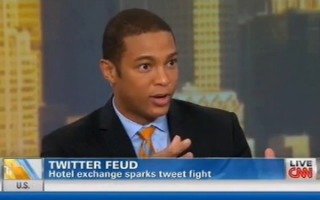 After an apparently tense run-in with Hill, Lemon Tweeted that he had “Said hi to @JonahHill in hotel. Think he thought I was bellman. Didn’t know his name til bellman told me. A lesson to always be kind.”

You know what would have taught him a lesson, Don? Tweeting “I think I just saw Seth Rogen! :)”

Hill responded by writing that “I said hi what do you want me to do move in with you? I was in a hurry. Didn’t realize you were a 12 year old girl. Peace.” SNAAAAAAAAAP. Snappity snap snap snap.

To which Lemon responded, “Hardly. You’re not my type. But I know rude. And u were.”

Lemon then explained that he’d been at a hotel waiting for his bags when he recognized the actor and decided, although he couldn’t quite remember his name, to let him know he liked his work and found him funny. When he went to go talk to him, however, Hill simply walked by him with a look, then turned and gave him a “wet fish” of a handshake. Lemon felt, he shares, as if Hill had been treating him “like the help.” He says he decided to keep responding to Hill on Twitter because, among other reasons, “the thought that I am waiting for Jonah Hill outside a bathroom is absurd.”