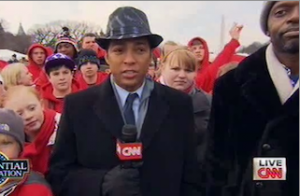 One of the most talked-about moments from President Obama‘s speech today was the section in which he mentioned Stonewall alongside Seneca Falls and Selma, becoming the first president to address gay rights in an inaugural address.

The historic moment was marked in a unique way on CNN, where lead anchor Anderson Cooper, who came out publicly in July of last year, threw to reporter Don Lemon, who did the same in 2011, to get reactions from the crowd.

Lemon spoke to two gay men who had watched the president’s speech from the National Mall, saying, “There are gay people out on the mall who were very proud. Some people were surprised in a good way that the president mentioned gay rights in his speech.”

First, a man named Reggie said, “I thought it was good that it was inclusive like that. It’s a little bit surprising, but given his history, the Obama administration’s history with the repeal of Don’t Ask, Don’t Tell and also his evolution of gay marriage, it’s really not surprising.”

Then, another man named Greg offered, “I was surprised that he mentioned Stonewall because it’s not something that you’re used to hearing when they discuss about civil rights, especially from a president, so that really struck me when he said that.”

Asked what he hopes the president’s words will do for the gay community, Greg continued, “I hope it pushes us forward and makes us equal with everyone else, included with everyone else in the country. It makes me feel good to be an American right now and think that things are going to be better in the future.”