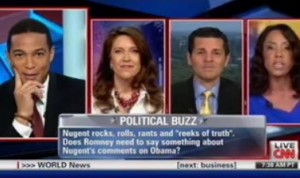 As the Secret Service looks into potentially threatening comments by musician and gun rights icon Ted Nugent, pressure has been building for Republican candidate Mitt Romney to reject the endorsement his campaign now claims they “never solicited,” and denounce Nugent’s remarks. During a CNN “Buzzer Beater” segment this afternoon, anchor Don Lemon did his level best to let Romney off the hook.

The three panelists in the “Buzzer Beater” segment gave the predictable mix of opinions (one compared Nugent to Bill Maher, but last time I looked, calling someone a c*nt during a stand-up routine wasn’t grounds for a Secret Service inquiry) but it was Lemon’s attitude toward the controversy that was noteworthy. He set up the segment by playing a clip of Nugent’s remarks, which included his assertion that “If Barack Obama becomes the president in November again, I will either be dead or in jail by this time next year.”

Lemon tossed the issue to his panel with the leading question “Does Mitt Romney have to come out and say…He doesn’t really have to address this, does he?”

Setting aside the ridiculous double-standard embedded in that statement (President Obama’s entire 2008 campaign was derailed by media obsession with a supporter’s remarks), Romney has a responsibility to respond because even if he didn’t “solicit” the endorsement (and as the Secret Service is learning now, it’s often better to seek something than to solicit it), he did make a promise in order to secure it, and cheerfully accepted it. But even if he hadn’t, even if Nugent had endorsed no one, decency would demand a response, as Lemon’s next question unintentionally demonstrates.

Later in the segment, he laughingly asked “Why would anyone with a brain even pay attention to something that Ted Nugent said? wouldn’t you just be like whatever?”

That’s exactly the point: no one with a brain pays attention to anything Ted Nugent says, but millions of people with guns do, people who are convinced, despite all evidence to the contrary, that President Obama means to confiscate those guns, people who have been hoarding them since before he took office.

Even if the Secret Service determines that Nugent’s remark (which, to be fair, is open to interpretation, in much the same way that “Nice President you got there, be a shame if anything happened to him” is open to interpretation) is not actionable, even in light of his past admonition for Obama to “suck on” his “machine gun,” and even if Nugent himself lacks the requisite stones to carry out the act himself, one member of that army of paranoid gun-worshipers just might. Mitt Romney’s cowardly silence amounts to, if not tacit encouragement, a missed opportunity at discouragement.

Don Lemon’s instinct to laugh at Ted Nugent is understandable, but when it comes to an incident like this, the media is really the only line of defense against this tide of menace. I’ve been covering the Secret Service for years, and their well-known modus operandi is to downplay threats to the President, because they believe publicizing them tends to lead to more threats. This may well work in Nugent’s favor, but with the President already reportedly the recipient of a record number of threats, the media needs to take the possible consequences of Nugent’s words seriously, if not Ted Nugent himself.