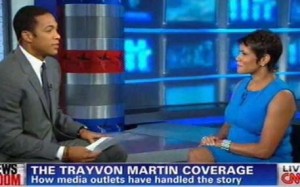 The coverage of the  Trayvon Martin story, like the incident itself, has been a case study in microcosmic illustrations of larger themes in our society. One such instant cable news parable occurred Sunday night, when CNN’s Don Lemon was interviewing commentator-about-town Goldie Taylor about the social faultlines this case has exposed, and casually said, as an aside, “please don’t send me any more tweets that by having this conversation, I’m a racist.”

After a commercial break, Lemon revealed that someone on Twitter had responded by saying “Don Lemon, you are a racist. You are fixated on this one issue over and over. We want to hear the news, not your personal agenda. Go work for BET.”

Aside from the obvious contradiction inherent in calling Don Lemon a racist while telling him to go work at BET , it raises the question of what the inverse of that tweet would be. Go work at…pretty much anywhere else on TV?

It could have been worse, I suppose. Just ask Soledad O’Brien, who unleashed a torrent of attacks when she asked for people to “stop the crazy tweets” about Critical Race Theory.

Mr. Lemon added, “That was the nice one. He didn’t call me the n-word.”

Goldie Taylor offered her own amusing Twitter exchange. “I”ve been called the n word more, collectively, over the last 72 hours than I have my whole life,” she said. “It’s amazing to me what people will say with the anonymity of a tweet.”

Lemon asked, “What did they say?”

“I was checking my Twitter, and someone said, ‘I’ll shoot you,’ and my response was, ‘You better be a quicker draw.'”

Taylor and Lemon also made a great point about recent criticism by Fox News contributor Liz Trotta that black journalists “hurt their credibility” by talking about personal experiences with racial profiling. “When we talk about race in these stories,” Lemon said, “this is the only place where some people — I saw a story about a journalist who had been profiled, shared their experiences, but they shouldn’t do that because it takes away from their credibility. This is the only subject matter where experience doesn’t count.”

Goldie added, “I’m an opinion writer, so I’m not a journalist, a reporter, I tend to share my personal experience, put context around a story, especially those I’m most passionate about. But to say that working journalists don’t have the right or platform to speak from their own experiences and put a context around the story, I think that’s really an unfortunate indictment to be made.”

While a certain segment of the population, the ones who are telling Don Lemon to go work at BET, seem to think that the media has been focusing too much on the racial aspects of the Trayvon Martin story (the undeniable racial aspects, by the way), a new study from Pew shows that coverage of the Trayvon Martin killing has actually not been focused on race. On cable and talk radio, race comes in a distant seventh place in the media’s focus, trailed only by “sympathy for Trayvon.”