CNN’s Don Lemon To Donald Trump: What Would It Matter If Obama Wasn’t Born Here
video

CNN’s Don Lemon To Donald Trump: What Would It Matter If Obama Wasn’t Born Here 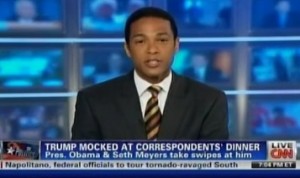 Just when you thought every angle in the “Birther” controversy surrounding Barack Obama’s birth place (and legitimacy as president) had been all too thoroughly scrutinized there comes this. During a live interview with reality TV show host Donald Trump, CNN’s Don Lemon suggested that it may not have even mattered where Obama was born “since what exactly natural-born is has never been litigated.” Was this a new front in keeping the birther story alive? Or just a really wacky line of questioning for the CNN news anchor? Maybe both.

Lemon seems to suggest that since the term “natural-born” has never been clearly defined (one would assume with regards to the office of U.S. President) that the place of Obama’s birth may have little bearing on his legitimacy in serving U.S. highest political office. He also mentions John McCain‘s birth in the then US territory of the Panama Canal as another historical oddity that was never litigated in the context of Trump’s strange (and strangely effective) obsession with Obama’s birth certificate. Credit to Lemon and his producers for coming up with a new road of coverage on this issue, one that few, if any, have traveled down.

In fairness to Lemon, according to the website USConstituion.net, a natural-born citizen is not as clear cut as one may have previously thought:

Who is a natural-born citizen? Who, in other words, is a citizen at birth, such that that person can be a President someday?

The 14th Amendment defines citizenship this way: “All persons born or naturalized in the United States, and subject to the jurisdiction thereof, are citizens of the United States and of the State wherein they reside.” But even this does not get specific enough. As usual, the Constitution provides the framework for the law, but it is the law that fills in the gaps. The Constitution authorizes the Congress to do create clarifying legislation in Section 5 of the 14th Amendment; the Constitution, in Article 1, Section 8, Clause 4, also allows the Congress to create law regarding naturalization, which includes citizenship.

Currently, Title 8 of the U.S. Code fills in the gaps left by the Constitution. Section 1401 defines the following as people who are “citizens of the United States at birth:”

So yes, it appears that the definition of who actually gets to claim “naturalized citizen” status is somewhat vague, and could theoretically be litigated in a court of law. However, from this writer’s vantage point, it seemed at best to be a really odd question to ask of the “King of the Birthers”; and at worst to be woefully off-target.

Lemon followed up with Trump on critiques that the presumptive GOP leader is racist (as many in the media have started to vocally claim.) Perhaps the “who-cares-where-he-was-born” question was a means to establish the allegation that Trump’s tilting at birther windmills was racially motivated? One may never know.