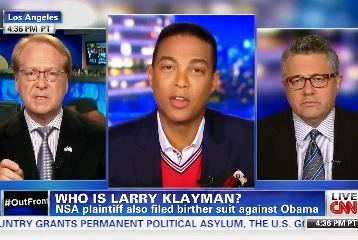 With all the hubbub over the big federal court decision over the NSA this week, you may ask whose lawsuit brought it to fruition in the first place. It’s none other than tea party activist Larry Klayman, and when he dropped by CNN Tuesday night to talk about the ruling with Don Lemon and Jeffrey Toobin, the segment went off without a hitch. Except for the arguing and personal sniping and Klayman getting cut out of the segment.

Klayman has previously received media attention for saying during a government shutdown rally that Obama needs “to put the Quran down, to get up off his knees, and to figuratively come out with his hands up,” leading to a particularly contentious fight with Martin Bashir.

On CNN, Klayman was steamed that his appearance was preceded by what he saw as a hit piece on his character, and told Lemon, “It’s important to note that you’re a big supporter of Obama, that you have favored him in every respect.” He called Lemon an “ultra-leftist,” but Lemon interrupted and threatened to cut him out of the segment if he kept going.

Toobin, who was never a fan of what Snowden did, argued that this was an important ruling on a serious subject that shouldn’t be tarnished by the “tin foil hat paranoia” of the “lunatic” on screen with him. Klayman responded by attacking Toobin’s past and calling him an unserious person who ‘should not be doing legal commentary for CNN.”

At one point, the sniping got so nasty, Lemon jumped in to say, “Oh my gosh, are you okay?” He cut Klayman out of the segment so he and Toobin could keep things calm, only to bring Klayman back to take the high road.

Klayman attacked them again, saying “CNN removes you from the screen when it doesn’t like what you think” and shaming their “disgraceful” performance.