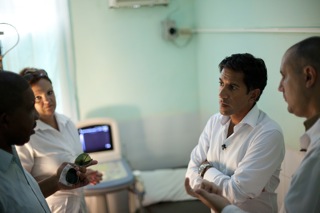 90 miles and decades removed from the United States, the island of Cuba persists as a stubbornly living relic of the Cold War, excommunicated from the Western world just enough to make everything from its music to policy to its health care system a mystery. It was to explore this latter element that CNN’s Dr. Sanjay Gupta found himself Havana last week, from where he told Mediaite his first impressions and expectations on the island, and worked on an upcoming documentary on swimmer Diana Nyad‘s attempt to traverse the stretch of water from Havana to Florida.

Many have argued that the Cuban health care system is somewhat of a marvel compared to the rest of the island’s industries– not the least due to the fact that the government made a very public push to make doctors its greatest export. This has led to both strong criticism from those that perceive it as a distraction from the goings-on otherwise on the island, or see it as a ploy for the nation to ingratiate itself internationally with nation’s that simply cannot afford good medical education. On the other hand, those who praise it cite numbers (mostly from the Cuban government) that show the average life of a Cuban to be, at least on paper, more disease-free than many in the Western world. To this end, Dr. Gupta traveled to the island to take a look himself and try to speak to as many people on the ground there as he could.

Journalistic missions like these, even if explicitly avoiding the political situation on the island, nevertheless touch on an emotional, political wound that hasn’t stopped bleeding for more than half a century. The relationship between Cuba, the Cuban exile community, and the American mainstream media is a tenuous one, and as a member of the Cuban exile community, this topic is particular is personally difficult for me. I grew up with an acute understanding of the systematic physical and psychological destruction the regime is to blame for– it is plain to see every day in the faces of our loved ones, and the former prisoners of conscience in our communities who huddle in cafes to reminisce about the time they served in brutally inhumane conditions for having complimented America once, or written a defiant essay, or even worn their hair long or listened to “yanqui” music. The pain is inked in the headlines of our media that dare publish stories of families of political prisoners being beaten and scorned on the streets.

In this context– and in the context of the mainstream media’s history with the communist dictatorship (from Herbert Matthews to 1990s Lou Dobbs to Michael Moore to Oliver Stone)– justifying a look at the health care system at face value is about as acceptable as an in-depth report on Mussolini-era Italy’s efficient train system. Regime sympathizers have used it as a smokescreen to shield eyes from the atrocities of the regime, and thus the distrust in the community is very high when such analyses come to the fore. But in the post-USSR, post-internet world, in a world where the demand for Happy Meals and iPods has proven a far more powerful political motivator than the temptations of abstract fundamental human rights, opening governments requires shining spotlights and exchanging culture. Even apolitical reports like Dr. Gupta’s force the regime to exhibit a candor with which it is unfamiliar, and serve to remind the world of the inconvenient fact that Cuban people, so many decades later, still live under the yoke of the Revolution’s dilapidated, rabid haughtiness.

With this heavy in mind, I spoke to Dr. Gupta earlier this week from Havana–who, as you will read, came into the experience acutely aware of the nature of the government, no agenda and plenty of curiosity. I found in him a refusal to subscribe to the Oliver Stone/Michael Moore school of willful blindness, admitting there were breathtaking elements to the island while acknowledging the scattering of asterisks and conjectures surrounding the statistics of the health care system, and the inability of journalists to paint a full picture.

On the next few pages, Dr. Gupta gives his first impressions of the island, his thoughts on the health care system as he has seen it, and gives a closer look at the story behind swimmer Diana Nyad’s quest to swim from Cuba to Florida. The look at the Cuban health care system is part of an episode of his program Sanjay Gupta, MD, airing Saturdays at 7:30 AM, while the documentary on Nyad is still in production.

NEXT: Landing On Embargoed Territory