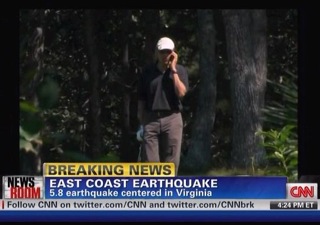 Today’s earthquake across the east coast left at least this half of the nation unsettled, and while the damage was minor, all eyes turned to the President for leadership on how to proceed. But the President was far from the White House today– in Martha’s Vineyard, taking it slow and playing golf while being regularly briefed on the situation. Granted, there was little to do in response to the earthquake, given the lack of physical destruction, but CNN’s footage of the President, clad in a polo shirt and preppy hat, chatting on his cell phone is the stuff RNC attack ad directors’ dreams.

CNN anchor Brooke Baldwin reported on the situation in D.C. and New York, where the earthquake was felt (it originated in Virginia), and noted that there was not, in fact, too much of a situation to be concerned about. She then turned to Dan Lothian, who was traveling with the President in Martha’s Vineyard, and he reported on the President’s work– he was receiving regular updates on the situation in D.C. while continuing a golf game that happened to be in progress at the time. Accompanying this report was footage of the President strolling the golf grounds, chatting on his telephone. Lothian added towards the end that the President was also getting reports on the extremely dramatic, unpredictable situation in Libya.

Anyone who knows anything about politics can readily admit that the President doesn’t really have the sort of power to do anything meaningful to respond to a scary natural disaster that, at press time, has done little damage greater than causing havoc in kitchens coastwide. On paper, the CNN report proved that the President was doing everything he could. That does nothing to justify the unfortunate optics of having the President appear on vacation enjoying himself while many in the country are in mild fear– nor does it justify the way the Libyan situation is presented in the footage, as an afterthought to a minor but local threat, because it is just so out of hand and so far away.

President Obama already has a track record of coming under siege for playing too much golf on the right, and the fact that the President was doing so when the earthquakes hit was not lost on many conservatives. His figure ambling across a golf course is now the image the rest of the world is seeing next to (highly unlikely, but understandable) concerns that an American power plant could go the way of Fukushima, next to images of American journalists getting grazed by bullets on Muammar Gaddafi‘s home turf. Facts are very stubborn little rascals, but it’s easy for a sharp propagandist to smokescreen them by simply comparing the above image to, say, this one.

Moderates and liberals will be sure to laugh at the idea that the President should have been doing anything other than taking phone calls at the time the earthquake hit, and are already doing so. And advertising attacking the President for playing too much golf, especially in this context would be sure to receive its fair share of ridicule for harping on an issue that has no impact on the average America. But the President is up for reelection against a team notorious for their ability to render a capable, hard-working leader ridiculous based on silly vacation images, and the footage has a good year to lose its current context and enter an attack ad that spans other issues and complaints conservatives may find worthier. If conservatives were grasping at straws before with the “Canadian” Obama bus (that the Secret Service purchased to save money), there is a near guarantee that we will see something like the 2004 anti-John Kerry “Windsurfing” ad in 2004.

Of course, at this point the “damage” is done, and any attempt to end his vacation early or look like he is working harder will only be interpreted by enemies as the President once again “caving” to the other side. Not to mention that it is entirely legitimate for the Commander in Chief to be golfing while on a previously scheduled vacation during an event of no real significance (whether he should be working to care a bit more about the Libyan situation is beside the point, as the early criticism pertains more to the earthquake). But the optics are so wrong out of context, and so ripe for the picking by opposition, that it will be a surprise if Americans don’t get used to seeing it air between their favorite TV shows this time next year.