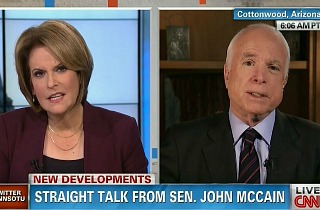 Sen. John McCain (R-AZ) sat down for an interview on CNN’s State of the Union on Sunday to discuss the aftermath of the government shutdown and its negative impact on the Republican Party. Borger pressed McCain on the internal division within the GOP and asked him if his party had entered a period of civil war.

Borger asked McCain about the shutdown and Sen. Ted Cruz (R-TX). Earlier, Cruz expressed his frustration with Republican senators who did not support the shutdown effort. McCain said that Republicans had been the “leaders in the fight” against the Affordable Care Act long before Cruz got to the upper chamber of Congress.

“There are many ironies here, but one of them is the fiasco of this roll-out has been obscured because of this internecine strife that’s been going on in the Republican Party,” McCain said.

“Do you blame Ted Cruz for that?” Borger asked.

“I blame the whole effort,” McCain said. “Those involved in it went on a fool’s errand.”

RELATED: McCain Responds to Gohmert Attacking Him: It’s Not Malice if ‘Someone Has No Intelligence’

McCain said that the shutdown has “hurt” the Republican Party brand, but said that pursuing immigration reform, fixing sequestration, and reducing taxes will help restore the public’s faith in the party.

Borger asked about conservative groups who have now targeted members of Congress that did not support the shutdown with primary challenges. “Are there two Republican Parties here now, in a civil war?” Borger asked.

“I think you need to have some straight talk,” McCain replied. “There are divisions within the Republican Party. We’ve had them in the past. The Democrat Party before Bill Clinton had them.”

“It’s very regrettable,” he continued. “Our adversary is not each other. And we will probably have to go through this discussion and debate. I just wish it would be respectful.”