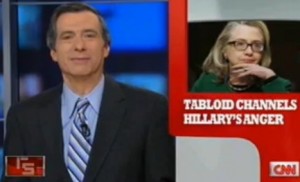 The New York Post got the attention it craved this week when it published a cover photo of Secretary of State Hillary Clinton vehemently responding to Sen. Ron Johnson (R-WI) at a Senate hearing on the Benghazi attacks, with the screaming headline “No Wonder Bill’s Afraid.”

The Post‘s sexist cover found an admirer in Fox News anchor Chris Wallace, and on Sunday morning’s Reliable Sources, host Howard Kurtz ignored the subtext, and declared that, while the cover was an example of “what tabloids do,” it was “pretty funny.”

In Reliable Sources’ “Media Monitor” segment, Howard Kurtz offered some good advice to Washingtonian reporter Sophie Gilbert on how not to lose a scoop like Beyoncé’s alleged lip-synching of The Star Spangled Banner at Monday’s inauguration. Unable to confirm the story via email, Kurtz advised Gilbert “Next time when you don’t get an email response, try the phone.”

But Kurtz missed the boat when he described that NY Post headline. “You might think the story at the congressional hearings on benghazi this week was how passionately hillary defended her department’s performance against her Republican critics,” Kurtz began. “Not for The New York Post, which ran this screaming headline ‘No Wonder Bill’s Afraid,’, with a photo of the Secretary of State looking very angry indeed.”

“But why drag Bill Clinton into it?” Kurtz continued. “Because that’s what tabloids do. It was kind of funny.”

Maybe Kurtz missed the last twenty years of sexist tropes about Hillary Clinton, including the famously literal interpretation of male threatdom that was the Hillary Nutcracker, but there were some other “subtle” clues on that Post cover, like the text next to the Bill Clinton photo, which proclaimed “The lady has some temper!” and characterized her testimony as “breathing fire.”

The fact that there is agreement from Howard Kurtz and Chris Wallace on this cover is further evidence of how important it is to increase the diversity of voices in cable news, because sometimes, one man’s “funny” is another man’s, or woman’s, “example of threatened male overcompensation.”