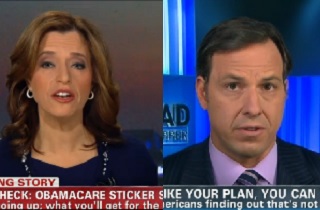 After relentlessly, deliberately one-sided and incomplete reporting by investigative reporter Drew Griffin, some CNN reporters have begun to make an honest effort to assess the effects of the Affordable Care Act on consumers who are complaining of “sticker shock.” On Tuesday, Jake Tapper and Elizabeth Cohen each featured interviews with consumers on the individual market, and while their reporting was more fair than what we’ve seen, it still falls well short of what’s needed.

In this case, it’s not a function of deliberate suppression of reporting, or an explicit desire to undercut the law, that is hampering the reporting, but rather, a reliance on consumers who aren’t insurance experts, and reporters who aren’t much better. For example, the excellent, über-respected Jake Tapper aired this segment on Tuesday’s The Lead, which featured an interview with Sue Klinkhamer, a Chicago woman who worked for a Democratic congressman:

The reporting logic is sound; interview a person who supports the law, but is still unhappy. What could be fairer than that? Get the facts, like her old premium of $254 and the $647 premium for the plan she’s being offered, and the two plans’ deductibles of $3500 and $6500, respectively. To the average person, this seems pretty thorough. Higher premium=bad, higher deductible=bad. Tapper even goes as far as asking her why she doesn’t like the $332 Bronze option. He’s not out to generate maximum horror.

On Tuesday’s The Situation Room, Elizabeth Cohen did a similar interview with 34 year-old Floridian Dave Payne another consumer who’s unhappy with the new plan his insurance company is offering. Similar to Tapper’s report, Cohen explains that Payne’s old plan premium was “$173 per month for a policy with a $5,000 deductible. Under Obamacare, his new plan would cost $244 per month with a deductible of more than $6,000.”

Cohen also explains, though, that policies like Payne’s don’t cover all of the essential health benefits required under the ACA. “When we looked at Payne’s current more inexpensive coverage, there are a lot of holes in it. It doesn’t cover maternity care or brand-name drugs or mental health care or even routine illnesses like hernias or ear infections.”

Compared to what’s come before it, Cohen’s report is the Platinum Plan of Obamacare reporting:

Both of these segments make an honest attempt at fairness. Neither of these people had what industry professionals would call “junk insurance,” even if those policies didn’t meet the ACA’s requirements, and the people interviewed each expressed some measure of enthusiasm for the new law. These reports, however, fail to take several important factors into account.

First of all, the decision to assess health insurance plans based solely on premium and deductible levels is akin to comparing new cars based only on their monthly lease payment and gas tank size. Neither measure gives you any idea of the quality and value of the product. For example, the $54 a month junk plan that CBS News reported on didn’t have any deductible. This simplistic metric is not unique to these reports; they have been used consistently in pretty much all of the reporting I’ve seen on Obamacare “sticker shock.”

The other major problem is that these folks are relying only on the new ACA plans that their insurance companies are offering them, when in every case, there are (possibly) better, cheaper options. It all depends on what the consumer is looking for. If you never, ever go to the doctor, then a plan with a high deductible, and little else, might be best, because you get a lower premium, and you’re pretty well covered if something goes horribly wrong. For most healthy people, a plan like this won’t pay a dime for their medical services throughout the year, aside from the ACA-mandated routine care, but the premiums are low, and it’s there if disaster strikes.

However, if you want to go to the doctor with some regularity, maybe have that trick shoulder checked out, and be able to get some prescriptions throughout the year, you might rather have a plan that lets you pay a low copay for those services, without having to meet a big deductible. Or maybe you want something in between.

Let’s start with Jake Tapper’s subject, Sue, who used to have a $254 premium, and a $3500 deductible, and who makes too much money to qualify for subsidies. What if I told you that Sue could get a plan with a much lower deductible, say, zero dollars? And what if I told you that she could pay a zero dollar copay for office visits, prescriptions, inpatient and outpatient hospital care? And what if I told you this plan was from the same insurance company that Sue had before? Now how much would you pay? If a $6000 deductible is worth $647 /mo., then this thing must be, like, a million dollars a month. How does $228.66 /mo. grab you?

I know what you’re thinking, that plan makes you get referrals, and who has time for that noise? In that case, you can get a $293 /mo. plan that does have a $6000 deductible, but which doesn’t apply that deductible to its $30 office visits and prescription drug copays, or for a little bit more, you can get the zero dollar deductible, zero dollar copays without referrals, at $309.78 /mo.

Okay, but what about Dave? He was paying $173 per month for a policy with a $5,000 deductible, and now faces a $244 per month premium, with a deductible of more than $6,000. What if I could get Dave’s deductible back down under five grand, say $3750, and let him pay a $10 copay for visiting his general practitioner, and $75 for a specialist, and $5-$75 for most prescriptions, without paying a cent of that deductible? Surely, that much better plan is worth a little extra, but it will only cost him $173.85. I will happily kick in the 85 cents. If he doesn’t like that one, there are 24 other plans cheaper than the one he was offered, including five plans that are cheaper than his old plan.

Granted, all of this information would be a whole lot easier for consumers and reporters to find out if Healthcare.gov were functioning properly, but even then, this is complicated stuff, and many of the people with the expertise to navigate it, like insurance agents, don’t necessarily have a huge incentive to save these people money. Another dimension that’s missing from the reporting is just how much money these people make. We know it’s more than 400% of the poverty line, but not how much more. If someone earning six figures walks in to buy health insurance, they’re not going to be escorted to the discount rack, nor are they likely to earn the tears of news consumers.

Finally, even ignoring the fact that these people actually do have access to cheaper, better insurance now, none of these reports take the extra step of explaining the tremendous benefits of the Affordable Care Act, for which most reasonable people wouldn’t necessarily mind a bit of a tradeoff.

It’s not as though liberal reporters are doing any better, either, unless your idea of clarity is a series of triangles that evolve to contain a big blue dick. So far, I’ve done four stories (including this one) debunking these misleading horror stories, and the only thing close to a correction has come from Fox News. Let’s hope the media starts doing the job right the first time around. I’m happy to help.