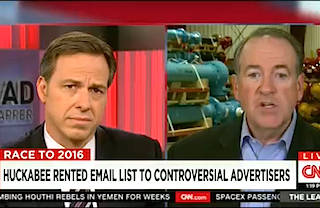 Toward the end of his interview with brand new Republican presidential candidate Mike Huckabee on Wednesday afternoon, CNN’s Jake Tapper brought up a somewhat obscure piece of trivia about the former Arkansas governor regarding one source of revenue he has engaged in since leaving his job as Fox News host.

As Tapper explained, earlier this year Huckabee rented his email list to a group called Health Sciences Institute, which was selling a “cancer cure” hidden by God in the Bible. The email came directly from MikeHuckabee@MikeHuckabee.com and included an intro message from the candidate about the “important information” from the sponsor.

“Don’t you lose credibility by attaching your name to things like that?” Tapper asked Huckabee, who in turn defended himself by saying he never signed the letter in question. He then turned the tables on the CNN host, saying, “My gosh, that’s like saying that you run some ads on CNN, do you personally agree with all the ads on CNN? I doubt you do.”

“I’m sure there are some for catheters or adult diapers, they’re not products that you use or you necessarily believe in,” Huckabee continued. “I don’t hold you responsible for that. And in that same way, I don’t think people who understand how advertising works would hold me responsible for something that I didn’t personally sign up for or endorse.”

Tapper shot back by calling Huckabee’s analogy as “false equivalence” and saying there is no real comparison between the “medical devices” that advertise on CNN and “something that I think a lot of people would consider to be hucksterism in terms of Bible verses curing cancer.”

Just as Tapper does not control what ads run on CNN, Huckabee claimed that he did not run the part of his company that chose advertisers for his email list. But while Tapper’s name is never physically attached to those ads on CNN, Huckabee’s did appear in large letter above the email message in question: 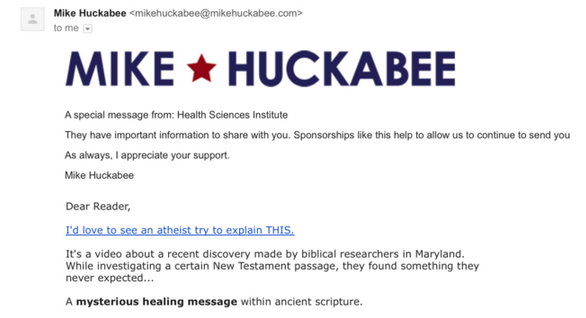