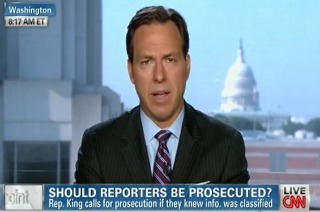 On Tuesday, Rep. Peter King (R-NY) told CNN host Anderson Cooper that he believed the journalists who broke the story relating to the National Security Agency’s communications monitoring programs should be prosecuted. CNN host Jake Tapper addressed this claim on the network’s morning show Starting Point where he dismissed King’s claim saying that it was simply not a feasible course for the government to pursue.

Asked if he expects to see charges filed against the journalists who broke the story relating to the NSA’s information monitoring programs, Tapper replied that he did not.

He noted that the DOJ has named journalists, superficially Fox News’ James Rosen, as criminal co-conspirators while researching sensitive stories, but they have stopped short of prosecuting any reporters. Tapper said he did not expect to see any journalists prosecuted because it creates “a slippery slope.”

Asked about Director Of National Intelligence James Clapper’s claim that journalists who pursued this story threatened national security, Tapper played a clip of Greenwald saying that the NSA scandal threatens nothing but the reputations of politicians.