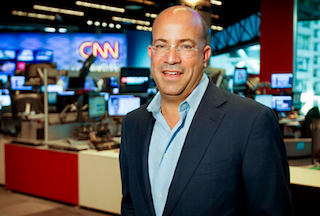 At the end of his first year as CNN’s president, Jeff Zucker delivered a note to his staff that thanks them for a 2013 in which there was “much to be proud of” and looks forward to 2014, when his goals of “broadening the definition of news” will start to take shape in earnest. “We have had a really good year. And we have so much more to do,” he writes. “That is what excites me the most.”

In an interview with Capital New York earlier this month, Zucker revealed his plans to inject more “attitude” in to CNN’s programming and produce “more shows and less newscasts.”

Read Zucker’s full memo to the CNN staff below:

As 2013 comes to a close, I wanted to take a moment to reflect on the year.

And, most importantly, to thank each of you for making this a successful year for CNN Worldwide. For CNN, HLN, CNN International, CNN en Español and CNN Digital, there was much to be proud of this year.

Once again, the organization’s commitment to excellence in journalism and newsgathering was paramount. This year saw some extraordinary news events, including the tragic bombings in Boston, tornadoes in Oklahoma, the election of a new Pope and birth of a royal baby, a coup in Cairo, the devastating typhoon in the Philippines and the death of Nelson Mandela. CNN was at all of these events, and so many others, in ways no other news organization can be. The strength of our anchors and reporters, the depth of our production teams and photojournalists, and knowledge of our behind the scenes teams, combined with the power of all of our platforms, once again showed why CNN truly is the global news leader.

With our commitment to excellence in all of our programming, our peers took notice. In 2013, CNN was recognized with three News Emmys, and two first-ever prime time Emmys for Anthony Bourdain Parts Unknown, as well as a Peabody Award for our coverage in Syria. CNN International was recognized by the Royal Television Society as the News Channel of the Year, and with an Asian Television Award for Cable and Satellite Channel of the Year. An incredible year for CNN International. And heading into 2014, CNN Films is on the short list for an Academy Award in the Documentary category for Blackfish. In our first year of even having a film division!

Competitively speaking, there is much to be proud of. CNN Digital had its best year, EVER. In almost every measurement, CNN’s digital properties, domestically and internationally, hit record highs. HLN was the only domestic cable news network to grow its audience this year, up double digits across the board. CNN moved from the third most watched cable news network in 2012 to second in 2013.

This was a transitional year for CNN Worldwide. As we close out 2013, our programming lineup on both the domestic and international channels looks different than it did this time last year. Our digital products do, as well, and are in the final stages of an even more significant reinvention soon. There are a lot of new names and faces on our air and contributing online, and we are putting them to work in ways that we haven’t done before. Behind the scenes we have begun to change the way we gather news and share it across the organization.

And there is much more to do. If you thought we did a lot in 2013, wait until you see 2014. Real change that transforms an organization doesn’t happen overnight. I have talked a lot about broadening the definition of news. You have seen the start of that, especially at CNN, where we have begun to introduce new series, documentaries and films to augment our best-in-class breaking news coverage.

I am often asked what has surprised me the most in my one year here. I think it is the incredible breadth and scope and depth of this organization. It is so hard to fathom from the outside just how big and far-reaching we are. CNN Worldwide is a powerful collection of platforms that, taken together, is unmatched.

None of it would be possible without each of you and without every single group that makes it all happen. It is finance and accounting, legal and human resources, marketing and promotion, standards and practices and The Row (yes, even The Row), Image and Sound and BEST, Master Control and the NCC and ACC, the Library and Security, and every other division here that makes sure that all of our networks and platforms succeed.

We have had a really good year. And we have so much more to do. That is what excites me the most.

I want to also take this opportunity to say thank you to Phil Kent, who has so successfully led Turner Broadcasting for these last 12 years, and who always made CNN his priority. We never had a better friend and we have been blessed to have him at the helm.

I hope the coming days offer each and every one of you the chance to reflect on your own successes – both personally and professionally. If there is one thing being in this business teaches you, it is that life can change in an instant. Take time for what is important. Rest and recharge when and where you can. I can’t wait to see what 2014 brings us.