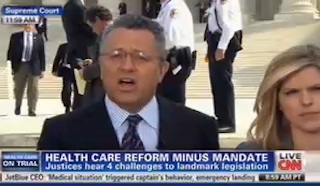 CNN’s Supreme Court correspondent Jeffrey Toobin gave an even more dire prognosis of Obama’s health care law to CNN’s Fredricka Whitfield. “This still looks like a train wreck for the Obama Administration, and it may also be a plane wreck. This entire law is now in serious trouble.”

Whitfield was surprised by Toobin’s foreboding predictions. “Oh, my goodness!” Whitfield said. “Okay, so I have got about 20 seconds or so left. How might this impact arguments later on this afternoon, Jeff?”

“Well, it’s hard to imagine how things could be going much worse for the Obama Administration, but now they’re going to be dealing with the Medicaid portion, and they may decide to get rid of that as well,” Toobin concluded.

Watch Toobin’s analysis below via CNN: