CNN’s Jeffrey Toobin On Zimmerman Lawyers: ‘One Of The Wackiest Press Conferences I’ve Ever Seen’
video

CNN’s Jeffrey Toobin On Zimmerman Lawyers: ‘One Of The Wackiest Press Conferences I’ve Ever Seen’ 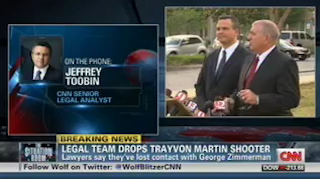 Following the announcement by Trayvon Martin shooter George Zimmerman‘s lawyers that they were withdrawing as counsel, CNN senior legal analyst Jeffrey Toobin phoned in to convey his bewilderment over the extraordinary proceedings. “That was certainly one of the wackiest news conferences I have ever seen,” Toobin quipped.

“I think they are obviously concerned about with his well-being,” Toobin continued. “But they are also, I think, potentially setting him up for an earlier arrest than they might have because one of the reasons a prosecutor doesn’t arrest someone right away is that the prosecutor is assured by the counsel that, look, he’ll surrender. He’s not going anywhere. I know where he is and he’ll turn himself in. At this point, the lawyers don’t know what he’s doing and don’t know where he is and the prosecutor may say, look, I better arrest this person or he’s going to be in the wind. So I think this bizarre episode might accelerate the prosecutor’s timetable if, in fact, she’s going to arrest him.”

“We’ve lost contact with him,” Sonner revealed during Tuesday’s press conference. “Up to this point we’ve had contact every day. [But] he’s gone on his own. I’m not sure what he’s doing or who he’s talking to, but at this point we’re withdrawing as counsel.”

Watch Toobin’s analysis below via CNN: