CNN’s Jeffrey Toobin to Nancy Grace: Execution Is ‘Not the Only Form of Justice!’
VIDEO

CNN’s Jeffrey Toobin to Nancy Grace: Execution Is ‘Not the Only Form of Justice!’ 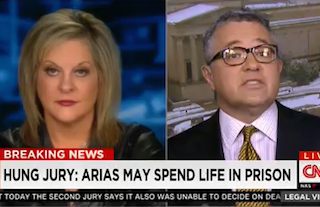 Following the hung jury in the Jodi Arias murder retrial Thursday, Nancy Grace and Jeffrey Toobin faced off on the question of whether a mistrial, resulting in a likely sentence of life in prison as opposed to the death penalty for the defendant, constitutes “justice.”

“This was a tough case on the death penalty It wasn’t a tough case on guilt, it was quite obvious that Jodi Arias was guilty,” Toobin said of the result. He went on to criticize the prosecution for spending a lot of money to retry the case in hopes of getting a death penalty ruling, when ultimately they ended up in the exact same place.

In contrast, Grace described the victim’s family, who “physically bent over and began crying out in pain” when they heard the verdict read aloud today. “And I always find it very interesting when pundits say, ‘Well, this cost a lot of money, and it wasn’t really a good decision.’ It’s like they’re buying a car or they’re making some kind of investment in their fidelity fund,” she added. “Well, you know what? Violent crime is not like that. We are talking about people’s lives.”

“What I want to say right now is this family has been through hell!” Grace declared. “And their hell is not over yet because the sentencing is not complete.”

“So, the idea that there is injustice because Jodi Arias is not going to be stuffed into a gas chamber or put in lethal injection is not necessarily the case,” he continued. “And it indicates no insensitivity to the victims who have suffered horribly in this case that she will not be executed.”

“Is that a question?” Grace asked in response. “I mean, I don’t even know what that was.”