CNN’s Jessica Yellin: Where Is The “Drill Baby Drill” Crowd During Oil Spill? 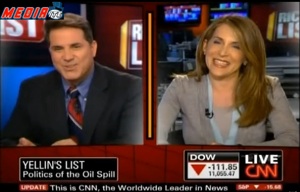 Earlier today CNN reporter Jessica Yellin reminded host Rick Sanchez of the “Drill Baby Drill” crowd, in the context of the current Gulf Coast oil spill that is currently unfolding, specifically citing former VP candidate Sarah Palin. Since then, Palin has responded on her Facebook page with a post entitled Domestic Drilling: Why We Can Still Believe.

“Drill Baby Drill” was the oft-repeated chant during the 2008 Republican National Convention, a clarion call from conservatives eager to diminish our nation’s dependence on foreign produced fossil fuels by opening environmental restrictions for oil rig drilling off the US coast.

Rarely does a viewer see on-air talent for the self-proclaimed agnostic CNN openly offer opinions about such topics, but both Sanchez and Yellin appeared to delight in pointing out how foolish the “drill baby drill” chanters now appear in hindsight. They did mention Sarah Palin‘s recent “tweet” on this subject, which read: “Having worked/lived thru Exxon oil spill,my family&I understand Gulf residents’ fears.Our prayers r w/u.All industry efforts must b employed.”

Palin has since added her more thorough reaction on her Facebook page, entitled Domestic Drilling: Why We Can Still Believe:

In the coming days, there will be hearings to discover the cause of the explosion and the subsequent leak. Actions will be taken to increase oversight to prevent future accidents. Government can and must play an appropriate role here. If a company was lax in its prevention practices, it must be held accountable. It is inexcusable for any oil company to not invest in preventative measures. They must be held accountable or the public will forever distrust the industry.

This was the position I took as an oil and gas regulator and as Governor of Alaska when my administration ramped up oversight of the oil industry and created a petroleum-systems-integrity office to monitor our oil and gas infrastructure for potential environmental risks. I took a lot of heat for the stand I took “against the oil industry” (which is how political adversaries labeled my actions). But we took tough action because there was proof of some improper maintenance of oil infrastructure which I believed was unacceptable. We instituted new oversight and held British Petroleum (BP) financially accountable for poor maintenance practices. We also filed a Friend-of-the-Court brief against Exxon’s interests for its decades-old responsibility to compensate Alaskans affected by the Valdez spill, and I took other actions “against” the industry which ultimately helped hold it accountable.

All responsible energy development must be accompanied by strict oversight, but even with the strictest oversight in the world, accidents still happen. No human endeavor is ever without risk – whether it’s sending a man to the moon or extracting the necessary resources to fuel our civilization. I repeat the slogan “drill here, drill now” not out of naiveté or disregard for the tragic consequences of oil spills – my family and my state and I know firsthand those consequences. How could I still believe in drilling America’s domestic supply of energy after having seen the devastation of the Exxon-Valdez spill? I continue to believe in it because increased domestic oil production will make us a more secure, prosperous, and peaceful nation.