CNN’s Jim Acosta Grills Obama on ISIS: ‘Why Can’t We Take Out These Bastards?’ 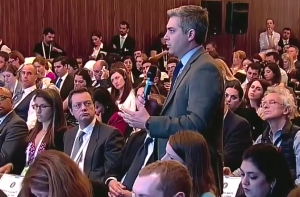 During a Monday press conference in Turkey, President Barack Obama was grilled by CNN’s Jim Acosta about his previous statements downplaying ISIS and why the United States couldn’t kill the “bastards.”

“I wanted to go back to something you said… earlier when you said you have not underestimated ISIS’s abilities. This is an organization that you once described as a JV team, that evolved into a now occupied territory in Iraq and Syria and is now able to use that safe haven to launch attacks in other parts of the world,” Acosta noted.

“How is that not underestimating their capabilities? And how is that ‘contained,’ quite frankly?” he asked (Obama referred to ISIS as “contained” in an interview the day before the Paris attack took place).

“And I think a lot of Americans have this frustration that they see that the United States has the greatest military in the world, it has the backing of nearly every other country in the world when it comes to taking on ISIS. I guess the question is– and if you’ll forgive the language– is why can’t we take out these bastards?”