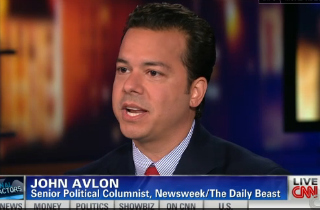 “If you end up covering campaigns from New York or Washington, D.C., you get one narrative. It’s a pretty one, but it’s not the whole picture.”

That’s what CNN contributor John Avlon tells us when describing how the national news media generally covers a presidential election.

“The election is going to be decided in the swing states, so we’d better to get out there actually talk to them,” says Avlon. “Narratives that ripple in D.C. don’t necessarily matter in these little districts. So we need to get out of the spin cycle and stop ignoring the real process voters undergo during an election season.”

In order to talk to such “actual deciders,” Avlon will travel to four different “swing districts” the night before each major debate and will create special segments for OutFront with Erin Burnett featuring those swing voters talking about what really matters to them — outside of the usual national news media spin.

Last night, in anticipation of tonight’s presidential debate, Avlon debuted the series — dubbed “Final Factors” — by visiting with voters in Jefferson County of the “purple state” of Colorado. There he found a single “predictive” precinct in the small middle-class community of Lakewood which has, with one exception, voted for the winner of all presidential and statewide races since 2000. The area’s median family income of $52,000 nearly mirrors the national average.

“It’s a fascinating microcosm of the national debate,” Avlon says of the 1,500 voters who are split roughly between registered Republicans, Democrats, and Independents. He talked to former Obama voters who are now undecided about this election and reported to Burnett that they don’t see things in terms of political parties, but instead base their vote on a bundle of specific ideas that sound the best for their middle-class needs.

He told Burnett that the voters did not care about the various memes of this election cycle — Mitt Romney‘s “47-percent” remark, for example — as much as they care about specific “actionable” ideas that the candidates have to offer.

This stands in stark contrast to how the national media typically present the average voter. “We pretend the country is deeply divided, but in fact, a fast growing segment of the electorate is independent,” says Avlon. “They want to vote for people, not parties.”

On the eve of next week’s vice presidential debate, Avlon will visit the manufacturing-heavy Stark County in northeastern Ohio, another area he calls predictive: “The culturally-conservative, blue-collar Stark County has traditionally been the predictor of whether a Republican wins Ohio. And no Republican has won the presidency without winning Ohio.” The county’s recent natural gas boom makes voters most concerned with the specific ideas Romney and Obama will present regarding environmental regulations and their treatment of the so-called hydraulic “fracking” industry.

The third “Final Factor” will visit Washoe County in Nevada, an area Avlon characterizes as still struggling to recover from the housing crisis. The candidates’ specifics on jobs and unemployment will play a key factor in this swing district’s votes.

And on the eve of the final presidential debate, Avlon will pay a visit will be to Pinellas County, the “key swing district” of the key swing state of Florida, which has a considerably high population of seniors. The county has voted both ways in the past. And unconcerned, once again, with the NY-DC-driven media narratives, Avlon believes this county’s voters will look for specifics on Medicare and health-care in order to decide how to vote.

Some of these “swing” trends may come as no surprise, but the idea that these “deciding” voters are unconcerned with the latest media-driven memes about either candidate flies in the face of how most outlets select their election stories of the day.

“We forget that politics are about people, in the end,” Avlon concludes. “We get stuck behind narratives and bumper-stickers. We really need to get out of the media bubble.”

Watch Avlon’s first segment of “Final Factors” from last night, below via CNN: