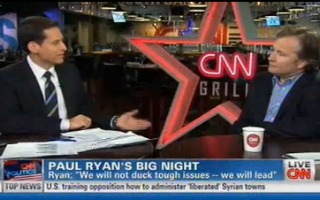 First, Berman took a look at Ryan’s remarks regarding a GM plant in his hometown of Janesville, Wisconsin, which Ryan said was closed a year after then-candidate Obama said that, with government help, it could remain open. “You know, Eric, that the decision to close that plant was made in June of 2008, when President Bush was in office,” Berman pointed out. “What Paul Ryan said there was clearly misleading.”

“Well, no,” said Fehrnstrom. “He didn’t talk about obama closing the plant. He said that candidate Obama went there in 2008, and what he said was with government assistance, we can keep this plant open for another 100 years. Here we are four years into his administration, that plant is still closed. I think it’s a symbol of a recovery that hasn’t materialized for the people of Janesville, Wisconsin, just as it hasn’t materialized for Americans everywhere.”

“He left the impression that President Obama shut that plant down,” Berman pointed out.

“I encourage people to go back and look at what candidate Obama said in 2008,” Fehrnstrom replied. “What he said was with his recovery program, with government assistance, we can keep that plant open for 100 years. Four years later, it’s still shuttered. I think it’s a symbol of a broken economy under this President.”

Berman then noted that Ryan had criticized Obama for “doing nothing on Simpson-Bowles.” But “Paul Ryan voted against Simpson-Bowles,” he pointed out. “Did he do less than nothing?”

“And then Paul Ryan brought forward his own deficit reduction plan,” said Fehrnstrom. “That’s not something this President did. Instead, he kicked the can down the road. And his is why so many people have lost faith in this President.”

“But he stood in the way of the Simpson-Bowles debt commission, and then criticized the President for not taking action on it,” Berman repeated.

“Paul Ryan had a plan,” Fehrnstrom argued. “He brought it forward. I think there’s an obligation on the part of people in Congress if they reject Simpson-Bowles to talk about what they would put in its place. Paul Ryan did that. what this President did was what so many people before him have done, which is to form a commission, and when the commission comes forward with a report they don’t take action on the report. They put it on a shelf where it gathers dust.”

Later, Berman asked Fehrnstrom about his now-notorious “Etch-a-Sketch” comment, pointing out that the sentiment behind his comment is now being echoed by prominent Republicans at the RNC.

“The point I was making back then is that the campaign in the general election is going to be different than the primary campaign in this sense,” Fehrnstrom explained. “In the primary campaign we had eight opponents. We were talking about the legislative record of some of those opponents like Newt Gingrich and Rick Santorum. Today we’re in a different situation. It’s a one-on-one contest with President Obama. And I think what we’re looking forward to is the opportunity to debate the President in October three times and I think what people will see in that setting is a person in Mitt Romney who is extraordinarily qualified to lead at a time of crisis in this country. He has a plan to put America back to work. And we can compare that to the failures of the Obama administration over the last four years in creating jobs and getting this economy in order.”