CNN’s John King Asks Panel: Are These ‘The Worst Days Of Obama’s Presidency’? 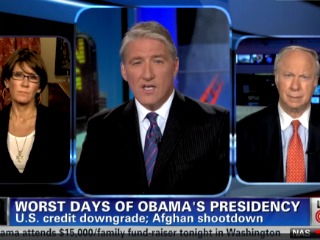 CNN’s John King assembled a panel yesterday to discuss whether the recent credit downgrade and the devastating loss of specialized troops in the ongoing war in Afghanistan mark these as the worst days of Barack Obama‘s presidency. He brought on a couple of individuals who know a thing or two about following presidents as they navigate through extremely tense times: CNN senior political analyst David Gergen and CNN political contributor Mary Matalin.

First, Gergen weighed in and offered a warning to consumers who might grow too afraid to spend:

I don’t think you’re overstating it, John. This past week, I think, was one of the toughest, perhaps the worst week the President has had because the markets fell so sharply even as he announced the debt ceiling agreement and then he had the Friday, Saturday and then this weekend. So it is, it’s tough. But I think the President discovered today that words alone are not enough. He tried very hard to reassure investors, as you know, when he came out this afternoon and hen he spoke, the DOW was down around 400 and by the end of the day it was down 600. He’s got to go beyond words; he’s got to take some actions now, I think, to reassure Americans. One of the real problems of what happened today is it could spook consumers; it could really make people fearful and they’re not going to spend and that could hasten a “double dip.”

Matalin then offered a look at what it’s like to deliver bad news to a waiting nation:

I had the great good fortune and honor to work with men of inordinate breadth and depth of experience, not just in the 9/11 George W. Bush White House, but for Dick Cheney and with George Herbert Walker Bush, so this kind of experience can put these big shifts in context. That’s really important, as David knows, that you don’t react; you’re not in a responsive mode. You’re trying to convey leadership and confidence and particularly in this situation right now, it is — I’m echoing David — people have lost their greatest source of wealth, which is their home equity, they’ve had their savings, their investments, their retirement all wiped out in one fell swoop, there’s no confidence that Washington can function at any level and this President is not conveying, not just by the absence of talking about deeds. There’s just something that he’s not coming across with. And I’m not just saying that as a partisan. I’m pretty spooked myself down here with two kids in high school and a retirement staring us in the face.

It is isolating, but you have to keep your head about you and you can’t be subjected to political posturing or aides that want to put you in a political situation.

Matalin and Gergen (Who both just seem so… tired of it, don’t they?) also brought up an interesting observation: The President seems to be surrounding himself more with “political” people than those who have a deep knowledge of economics.

Tell us: Do you think the President’s handling of these crises will determine whether or not he’ll serve a second term? Is there a U.S. President you think demonstrates an ideal example of how to lead under pressure?