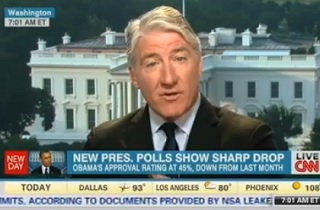 A new CNN/ORC poll shows a steep decline in President Obama‘s job approval rating, which is down eight points since CNN’s last poll, while his disapproval rating climbed by nine points. On CNN’s spanking new New Day Monday morning, Washington correspondent John King tried to explain the precipitous drop by citing the recent revelations about National Security Agency programs, but in falsely labeling those programs, may have inadvertently revealed the true reason for the President’s freefall.

In the week following Scandalabra™ Weekend, when news of the IRS/Associated Press/Benghazi talking points stories exploded out of every orifice in the mainstream media news cycle, CNN’s May poll showed that President Obama’s approval rating had actually ticked up two points. Given the generally positive economic news of late, it seems obvious that the current drop, from 53% approval/45% disapproval to 45% approval/54% disapproval, is likely related to the news of NSA data collection programs. That’s the real trick, though: figuring out how much of it has to do with the programs themselves, and how much has to do with the way they have been reported. On New Day Monday morning, John King demonstrated the latter by misreporting the former.

Explaining the results of the new CNN/ORC poll, which showed a steep 17 point decline among 18-34 year-olds, King said “Remember how he won two elections, independents and young voters. Look at the numbers, a 17-point drop in his approval rating in just one month,” and added that “they don’t like people reading their e-mails, tapping their phone calls.”

The problem with that, of course, is that the NSA does not stand accused of “tapping” anyone’s phone calls, or of reading any American’s emails, under the programs that have been revealed in the past two weeks. The collection of telephone records is confined to phone numbers, call times, and locations, and a specific warrant is required to listen to phone calls. The Prism program, it has been revealed, consisted of legally obtained overseas internet information, stored on its own server, and requires a specific warrant to read any American’s emails. It’s fair to question the adequacy of the secret court that issues those warrants, but that’s not what John King was doing.

This is not to pick on John King, though, because he is not the only one who has been doing this. Ever since Scandalabra™ Weekend, the mainstream media have been engaged in a campaign of recklessness that would make Courtney Love and Amanda Bynes tell them to get their shit together, and they’ve finally found a lie to tell that Americans care about. It’s as if they took all of the bitterness they’ve swallowed, from every time anyone ever said they were “in the tank,” and threw it all up at once. Even supposedly pro-Obama MSNBC has been giving major play to certain Scandalabra™ elements, and turning over significant chunks of airtime to Glenn Greenwald and his exaggerated claims.

The truth is, these poll numbers are really bad, and there’s really no way to know how much of it is due to the substance of these revelations, and how much is due to the coverage. There are some clues, however. Since the NSA story broke, polls have consistently showed that Americans are pretty much fine with the trade-off between security and privacy, and this one is no exception. Fifty-one percent of Americans approve of the phone data collection, while 66% approve of the internet data collection and analysis, and 52% disapprove of leaker Ed Snowden‘s activities. A full 55% think the President has either gone just far enough, or should go even farther, in “restricting people’s civil liberties in order to fight terrorism.”

There’s also a secret embedded in the CNN poll that they probably won’t tell you, nor will anyone else. The other big drop that CNN is pimping is among independents, who now approve of the President at 37%, versus 61% disapproval. That’s a real attention-grabber, but if you look a little deeper, you’ll see that this is more a function of the “independent” label’s abuse, and almost all of the angst at the President is confined to the political right. Among self-described liberals, the President’s approval rating is a not-surprising 75%, and among conservatives, it’s an equally predictable 20%. But among self-described “moderates,” the President’s approval rating is 53%, versus 45% disapproval.

Nobody hates whining about “bias” more than I do, but that’s not what this is. This is misinformation, and given how much of it has been put out by the maonstream media, it’s a wonder the President’s approval has held up this well.