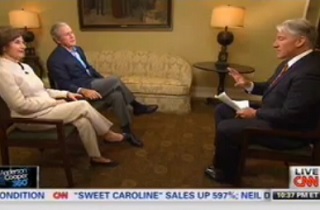 The dedication of the George W. Bush Presidential Library And Museum has resulted in a flurry of interviews with the last Republican to occupy the White House, and a historical whitewashing worthy of an army of Tom Sawyer‘s friends. In one such interview, aired on Wednesday night’s Anderson Cooper 360, CNN’s John King took former President George W. Bush to task over his decision to start the Iraq War, if by “task” you mean “a very happy place, like Equestria, where nothing real can touch you,” and by “his decision to start the war,” you mean “nothing.”

Before I get to this interview, however, I feel it’s only fair to offer a few words in defense of John King, and even of this interview. First, King has taken a lot of heat over his reporting during last week’s manhunt for the Boston Marathon bombing suspects, and while a certain amount of it is deserved (his odd choice to stop at “dark-skinned” out of “sensitivity” is tough to figure out. What was the rest of that sentence? “Dark-skinned retarded chick?”), I think he has taken too much of the blame for the network’s erroneous hourlong run with the “suspect in custody” report. True, the network was first in and last out with that narrative, but as I recall, that reporting was based, mainly, on CNN contributor Fran Townsend‘s two sources, whereas King only contributed a local source to confirm that reporting.

As for this interview, it’s only fair to stipulate that I haven’t seen much of the many other interviews President Bush is giving these days, and there’s every chance that they’re all as Nerf-laden as this one. The point isn’t necessarily to get on John King’s case, but to expose the general air of gauzy bull-puckey surrounding this momentous occasion.

I also really hate the vein of media criticism that ticks off all of the things an interviewer should have asked, and with a checkered 8-year term to go over, any interviewer would be bound to miss some things. When it comes to George W. Bush, however, it would be a fatal error not to ask about the Iraq War, and King did bring that war up, three times.

The first was early in the interview, when King asked President Bush, not if he had any second thoughts about the decision to invade Iraq at all, but whether the invasion was carried out properly. The second and third references were to ask whether “angst” over Hurricane Katrina and the Iraq War made it hard for Bush to get things done, and whether it made it hard for people to see all of the awesome things he did.

Here is the Iraq War portion of John King’s interview: (Note: don’t judge the entire interview by this clip only, this is just the part I’m focusing on. You can see the full interview here and here)

Now, I’m not one of those liberals who blames George W. Bush alone for the Iraq War, or thinks he was “evil” or something. I’m perfectly willing to accept the idea that he really believed there would be WMD discovered in Iraq, and really, really believed he was doing the right thing. Most elected Democrats (but not Barack Obama) voted for the Iraq War Resolution, and I don’t buy the “We were misled” excuse, because even if you took every suggestion of “mushroom clouds” and anthrax vials as gospel, it was still a preemptive war that had nothing to do with the attacks of 9/11. Additionally, it took resources away from the war that did have something to do with 9/11, at a time when those resources could have made a real difference.

George W. Bush was “The Decider,” and his decision to invade a country that had nothing to do with the attacks on our country, and which posed no threat to us, is the defining decision of his presidency. You might as well interview Pontius Pilate and forget to ask him about that whole “Jesus” thing.