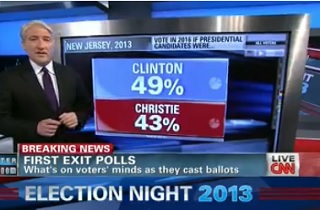 Governor Chris Christie (R-NJ) has just been reelected in what will be a landslide, even as his fortunes with Republican primary voters nationally have risen. To hear CNN’s John King tell it, Christie’s also in fine shape with general election voters. On Tuesday’s The Situation Room with Wolf Blitzer, King reported on Christie’s standing in a head-to-head presidential matchup with Hillary Clinton in New Jersey exit polling, and called the 6 point gap “slight.”

“Chris Christie says if I win big, that makes me a formidable Republican presidential contender,” King told Blitzer. “We’re asking people, as they vote today in New Jersey, if this were the lineup in 2016, Hillary Clinton, versus Chris Christie, how would they vote?”

“Chris Christie can make the case he would run stronger than Mitt Romney, he would run stronger than John McCain against the Democrat,” King continued, “but you see Hillary Clinton with a slight edge, at least in the early exit polling when voters in New Jersey today are being asked, even as we expect them to re-elect Chris Christie, Clinton versus Christie, close race, but the Democrat on top in a reliably blue state.”

That “slight” six point lead that Hillary Clinton holds over Chris Christie, in a state where Christie’s approval rating hits the floor at 61%, is also greater than the lead she’s had over Christie in any of Democratic-leaning (but dead-on accurate) Public Policy Polling’s 2016 general election polls. You can call this result “early,” or a poor indicator, but in the home state where he’s just won a landslide reelection, you can’t call a six point spread “close.”