CNN’s John Zarrella On Shuttle’s Final Flight: ‘It Sunk In As I Was Watching It Clear The Tower: That’s It’ 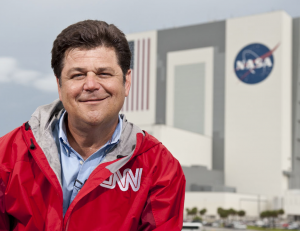 CNN’s John Zarrella admits it was a deeply emotional experience to watch shuttle Atlantis thunder from the launch pad in Florida this morning, making history as the last ever flight for the shuttle program that Zarrella’s been covering for decades. “Every time before this, I’ve always known that there would be another one. This one lifts off, and it just sunk in as I was watching it clear the tower. That’s it.” Zarrella spoke to Mediaite from the Kennedy Space Center, where he’s witnessed at least 75 shuttle launches, including the horrific day when Challenger exploded in the skies over Florida. “Challenger is so etched in my memory,” he told us, revealing the experience left him, for a time after the accident, with nightmares. “Never got that out of my head.”

Zarrella, a self-admitted “space geek,” says he’s hopeful that America’s space program will continue–and thrive–after the shuttle program’s end, but fears NASA may not fare well in a time of massive budget cuts. “It’s going to take strong resolve on the part of NASA and the White House…and the public. Do we want a first-rate space program in this country?”

Zarrella will mark the moment in history tonight, with a special report, Beyond Atlantis: The Next Frontier which airs on CNN tonight at 8 p.m. and 11 p.m. One question Zarrella ponders is what happens next for space exploration–will the United States keep its position as the boldest and most experienced nation, or will a country like China step to the forefront? “The real concern” among astronauts and NASA scientists, Zarrella says, “is that the United States is going to get passed by.” And China could do it. “They’re going gangbusters.”

As for the passing into history of the shuttle, Zarrella describes the majestic spacecraft as “an iconic vehicle” that has inspired countless kids to dream of being scientists, explorers and astronauts. “It’s not flying anymore, and I’ve got to wonder how that’s going to hurt.”

Zarrella says this morning’s launch–which he says sent Anderson Cooper‘s jaw dropping at its intensity–was like all the others: an amazing spectacle that was best experienced in person. “Television just never did it justice…how spectacular a flying machine that was.”

Here’s John Zarrella’s story on the members of the last crew to fly the shuttle, from CNN: