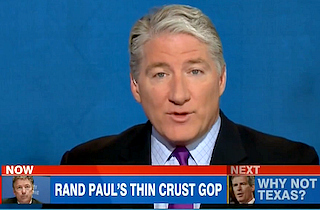 On Thursday, CNN anchor John King called Sen Rand Paul (R-KY) “the most fascinating politician in America, based on what he’s trying to do.” The basis for King’s interest is Paul’s continued outreach to groups which traditionally do not support Republican candidates, groups like college students, minorities, and women. King said his advocacy for a new GOP message that shifts away from orthodoxy on social issues shows he is “the one Republican who understands” the Republican Party’s “demographic problems.”

On Wednesday, Paul spoke before a group of students at the University of California, Berkley, where he said that the GOP needs to admit it has a problem with its product and not just its messaging.

“He’s the one Republican right now who’s playing outside the box,” King said. “He understands the demographic problem they have, maybe not in the primaries, but to win a presidential election. It’s pretty hard to see the Republicans winning a presidential election if they don’t do a little better among African-Americans, somewhat better among Latinos, among college students, among college-educated women.”

RELATED: Rand Paul: GOP Needs to Be Like Domino’s and Admit We Have ‘Bad Crust’

King added that Paul could have “walked away” from his outreach campaign when he was criticized after he spoke to a group of African-American students at Howard University, but he has instead learned from that experience.