CNN’s King: ‘Where Are the Democratic Super PACs’ to Defend Obamacare?
VIDEO

CNN’s King: ‘Where Are the Democratic Super PACs’ to Defend Obamacare? 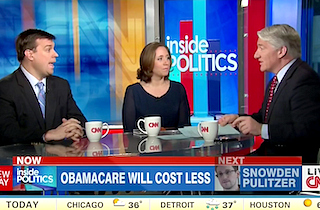 Noting that the Affordable Care Act was beginning to put up some rather positive statistics, from unexpectedly reaching its 7 million enrollment goal to the CBO’s lower projected costs, Inside Politics’ John King asked Tuesday morning when the Democrats were going to start actively campaigning on it.

“Where is the Democratic Super PAC to run this message?” King wondered. “To say, ‘Hey, Republicans were wrong, we got the enrollment up, it’s not as expensive as we thought.’ Why won’t Democrats decide, in this tough environment, the only way to change it is to go on offense?”

New York Times’ Jonathan Martin said he’d been wondering the same thing for weeks, and thought that Democrats were still looking to change the subject, despite the increasingly positive data. He noted that one ad had run for Senator Mark Begich (D-AK), but that it was on the pre-existing conditions provision, not the success of the law overall.

“One thing White House officials are talking about with some of the committees, the DSCC in particular, is having candidates target their outreach on health care,” Associated Press’ Julie Pace said. “So, sending mailers to women in particular, to young people who could benefit from the health care law. Not sort of the wide-ranging, statewide ads on health care, but more targeted outreach to people who might find the law more popular.”

“Independents,” Martin added. “The polling is still pretty rough there. Democrats are watching that.”