CNN’s King: Will Cochran ‘Forget’ About Black Voters Who Helped Him Win Primary? 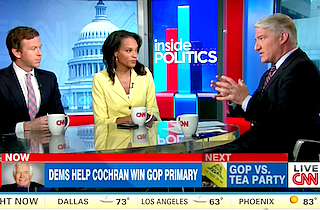 After Senator Thad Cochran (R-MS) eked out a runoff victory over tea partier challenger Chris McDaniel Tuesday, in large part because African American Democrats voted in the open race, Inside Politics’ John King wondered if he would forget about the voters who put him over the top, or use their participation as a springboard for a larger conversation about voting rights within the Republican Party.

“The question is now he’s Republican nominee, overwhelming favorite to keep this Senate seat in Republican hands,” King said. “What does he do: say thank you and forget, or might this be a turning point? Might you have an elder statesman Republican Senator come back to Washington…and tell his Republican leadership, ‘Let’s have an open conversation say about, say, voting rights?'”

“Possibly so,” the Washington Post’s Nia-Malika Henderson said. “That’s kind of how he ran this campaign, and certainly the way he sounded during his victory speech: ‘This was all Mississipians.’ When he was running ads in African-American newspapers, he talked about money that had gone to historically black colleges and universities. So perhaps he could do that. He could have a partner in someone like Rand Paul, who has talked about restoring voting rights to felons. But it doesn’t seem like that’s where the Republican Party is right now.”

“Cochran has never been a spotlight seeker,” CNN political reporter Peter Hamby said, “but it would be pretty cool.”