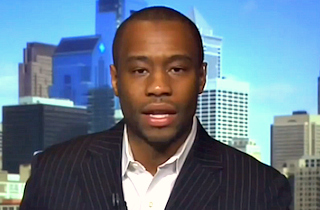 The segment revolved around a Fox & Friends tweet from earlier this week that appeared to link Attorney General Eric Holder to the shooting of two officers in Ferguson, a replay of the link some in the media attempted between Mayor Bill de Blasio and the shooting of two NYPD officers last December.

“There’s this narrative that protesters have blood on their hands,” Hill said. “All of this stuff emerges such that we can’t have a conversation about protesters without linking it to something bad that happened…If I say look, these protesters have a right to be out in Ferguson, even right now, people say ‘but what about the dead cops,’ as if supporting protestors means you must support dead cops. It’s not either/or, it’s both/and.”

“We have entered the pro-wrestling mode of cable news,” Hill said. “I have always said Fox News is to news what pro-wrestling is to sports; it’s kinda like news. But we’re all being seduced into that, where we need a good guy and a bad guy; we need the Hulk Hogan to defeat the Iron Sheik. Right now, we need there to be two sides and someone has to win. That’s not how it works: we don’t need a good guy and bad guy; we need a conversation.”