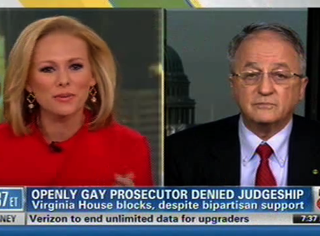 Today’s Starting Point featured a tense and poignant interview with Virginia delegate Robert Marshall, a self-proclaimed advocate who spearheaded an effort to block an openly gay man from a judicial position in the state, apparently solely because of his orientation. Brooke Baldwin led the interview, asking whether there was something beyond his sexuality that made him distrust the nominee, but Marshall insisted that “sodomy isn’t a civil right” and he could be biased in favor of gay parties to any lawsuit. This was not met with much agreement on the panel.

“I’ve been there 21 years, we’ve never appointed an activist of any kind,” Marshall insisted, though Baldwin wondered whether, given the civil rights changes that have happened in the past half-century, whether it wasn’t just time to move on. “Sodomy is not a civil right,” Marshall insisted, “it’s just not the same as the civil rights movement.” Baldwin once again asked whether there was any better reason for not hiring him than being gay, which Marshall considered “mischaracterizing” his argument: “I said sodomy is not a civil right and there’s an effort by homosexual activists to conflate the two.”

The problem here is that the Supreme Court has actually delineated sodomy as a civil right, as Margaret Hoover reminded him. “I’m sure you’re familiar with the case that was reviewed by the Supreme Court, Texas v. Lawrence, where actually sodomy laws were overturned; to say sodomy is not a civil right is an absurd argument.” She continued to ask if “all you can point to are things that relate to his sexuality” or if there were other reasons. Marshall insisted that it was his disloyalty to the military (by coming out as gay under Don’t Ask, Don’t Tell) that did it for him. “He made statements, he made actions that are incompatible.” He also did not trust him as a judge to recuse himself if he felt a bias, “if you have a bar fight, and there’s a gay guy.”