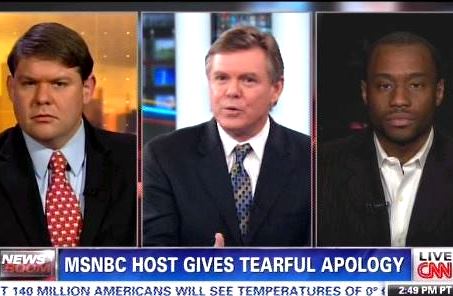 Hours after Melissa Harris-Perry‘s emotional and tearful apology for a segment on Mitt Romney‘s grandson Kieran, CNN’s Martin Savidge conducted a panel discussion on the apology with Prof. Marc LaMont Hill and conservative commentator Ben Ferguson. As Ferguson and Prof. Hill debated the merits of Harris-Perry’s apology, Savidge revisited a theme that came up on CNN earlier this week, asking “Do you think she should have been fired?”

Early in the segment, Ferguson opined that the apology sprang from Harris-Perry’s certain knowledge that “her job was probably on the line,” and tried to undermine Harris-Perry’s apology by observing that the segment was “pre-planned,” and that it “was something that was well thought out for a year-end show that was supposed to be funny.”

Prof. Hill pointed out that none of the jokes were scripted. In her apology, Harris-Perry, herself, stated that her selection of the photo was intended to “celebrate” the Romneys’ adoption of a black child.

But about halfway through the segment, as Prof. Hill asked Ferguson to decide whether the apology was enough, Savidge interjected “Let me ask you this. Do you think she should have been fired? ”

Eventually, after the umpteenth time Ferguson described the offense, Savidge admonished him “You are pushing this too hard.”