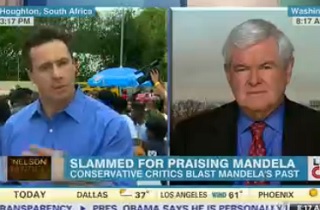 Former Speaker of the House and co-host of CNN’s Crossfire Newt Gingrich appeared on New Day Monday morning to discuss conservative backlash toward his praise of late civil rights icon Nelson Mandela, and changed his tune from the explanation he offered Candy Crowley over the weekend. While citing a misunderstanding of Mandela’s legacy, Gingrich also blamed “elements of the left, particularly on one news channel, who went overboard in trying to use this in a chance to attack Ronald Reagan.”

Gingrich didn’t mention “the left” or MSNBC when he spoke to Candy Crowley on Sunday, but apparently took the evening to fine-tune his message about the intensely negative reactions he received over his remembrance of Mandela. When Chris Cuomo asked him about it on Monday morning’s New Day, Gingrich reiterated his theory that some critics were conflating Mandela’s time in prison with the most violent period for the African National Congress, but then laid an equal portion of blame on criticism of former President Ronald Reagan, who vehemently opposed the sanctions that would eventually be instrumental in Mandela’s release and the end of Apartheid.

“The other was, I think, that some elements of the left, particularly on one news channel, went overboard in trying to use this in a chance to attack Ronald Reagan,” he continued, and added that “this was another excuse from the left to smear Reagan.”

If by “smear,” he means accurately report Reagan’s total opposition to anti-Apartheid sanctions, then Gingrich is absolutely right.

He also said that Mandela was “a very complex person with a very long life.”

Speaking of complex, Gingrich was, indeed, a vociferous supporter of anti-Apartheid sanctions, and pressured the Reagan administration in the 80s, but was also a relentless race-baiter in the 2012 presidential campaign, telling black people that they should “not be satisfied with food stamps,” and repeatedly suggesting that children be used to replace janitors in poor city schools. Maybe when your artificial horizon for racism is Apartheid, that stuff doesn’t seem so bad.