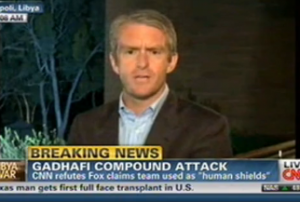 CNN’s Nic Robertson has called that he was used as a “human shield” by Libyan government forces in an effort to thwart a missile attack by British forces “outrageous and absolutely hypocritical.”

Live on CNN just after 6 p.m. ET, Robertson was asked by Wolf Blitzer about a Fox News report that an attack on Muammar Gaddafi‘s compound was called off on Sunday because journalists from CNN and Reuters were nearby. Citing British sources, Fox said seven missiles were ready to be fired on the compound, but Libya’s use of the journalists as “human shields” effectively ended the operation. “The curtailment of this mission led to a great deal of consternation by coalition commanders, sources told Fox News, but they opted to call off the mission to avoid civilian casualties.”

A visibly angry Robertson said “when you come to a place like Libya, you expect lies and deceit from a dictatorship…you don’t expect it from the other journalists.” Robertson said that while Fox News reported that its journalists skipped the “propaganda trip” Sunday night, the network did send someone with a camera. “He, this member of this Fox team was surprised that he was being sent,” said Robertson. “And the idea that we were some kind of human shields is nuts.”

Robertson described Fox’s correspondent in Libya, Steve Harrigan, as someone he’s known for many years, but then slams him, saying Harrigan is a correspondent “who very rarely leaves his hotel.” Robertson said he went on the short trip Sunday because “we’re news professionals and we want to see it for ourselves.”