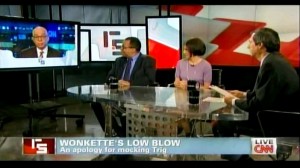 For those wondering where the mainstream media is in covering the brouhaha over Wonkette’s birthday attack on Trig Palin (since deleted), CNN’s Reliable Sources answered the call Sunday morning. Host Howard Kurtz gave a quick recounting of the offensive post (and perhaps too much credit for an apology), and while the panel unequivocally disapproved, the discussion was disappointingly superficial.

Kurtz pulled a few choice quotes from the post, saying that Wonkette mocked 3 year-old Trig Palin as “retarded,” “somewhat alive,” and “perhaps not really Sarah Palin‘s child,” then explains how the site initially stood by the post, but once advertisers began to desert the site in response to an online campaign, deleted the post and “apologized for poor comedic judgment.”

The Washington Post‘s Jennifer Rubin said the Trig post showed “rotten taste,” and brought up the David Letterman joke that prompted outcry (and an angry response from Sarah Palin) a few years ago. She also observes the near-free ride that Andrew Sullivan has gotten on his pursuit of Trig Trutherism. Unfortunately, she failed to connect the dots between the Wonkette boycott, Sullivan’s objection to it, and the fact that he’s next on their list.

Clarence Page talked about the “normally delightful” comeuppance of Wonkette at the hands of their “lack of experience” in not knowing that you don’t go after the kids. Adweek’s Michael Wolff called Wonkette “tone deaf,” and throughout the segment, a chyron that said “Wonkette’s Low Blow: An apology for mocking Trig” appeared.

Cumulatively, the effect was a failure to convey the true character of the Wonkette post, which was “tone deaf” in the way that a punch in the balls is “impolite,” and the apology, which was of debatable sincerity and completeness.

The segment was also disappointing because it didn’t ask any of the deeper questions that this story begs. Chief among them is the power of the Twitter boycott, and the question of whether such boycotts are necessarily a good thing. While it’s not surprising that Andrew Sullivan has reservations, so do some who support the boycotters in spirit.

Additionally, while comparing this episode with others where politicians’ children were insulted, it would have been natural to discuss the ways in which this attack crossed lines that the others didn’t. Finally, with advertising expert Wolff on hand, why not delve into the practical consequences of a #TrigsCrew-style boycott?

In any case, Kurtz deserves credit for covering a story that isn’t getting the attention it deserves, but is right in Kurtz’s wheelhouse. It would have been nice if he had gotten a little more distance on his swing.