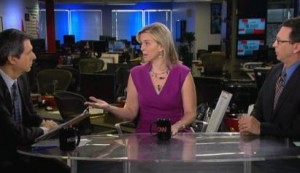 One week ago today, CNN contributor Roland Martin was tweeting during the Super Bowl, and ended up making some controversial comments that were interpreted by some as homophobic. Martin initially defended himself in the wake of calls by groups like GLAAD to get him fired, and then eventually apologized for his remarks, before CNN finally suspended him indefinitely. On Reliable Sources today, Howard Kurtz and panel debated whether this was the right move.

RELATED: Bill O’Reilly: Karma May Have Caught Up With CNN’s Roland Martin

Frank Sesno said suspending him was a good compromise, because CNN acknowledged that Martin’s tweets were a problem while understanding they were not worth him getting completely fired over. Kurtz countered by saying that CNN did not take any action until gay rights groups like GLAAD got involved. Lauren Ashburn argued that arguing your point of view on a network like CNN is a privilege, not a right, and there are certain standards that need to be upheld for people in that position. She recommended Martin “be assigned to do stories about the gay community” in addition to his suspension.

What Kurtz wanted to know was why CNN felt the responsibility to take action against comments made by one of their employees on another media platform. Sesno said traditional media outlets have higher standards than outlets like Twitter, while Ashburn brought up Erick Erickson. Erickson was known for making wildly controversial statements from time to time, but in the past few years, working for CNN has tempered his commentary. Sesno pointed out that networks have ethics policies that all employees have to follow. But are the same standards being applied to everyone?

Kurtz brought up Dana Loesch‘s controversial remarks last month about the Marines who urinated on Taliban corpses. People were demanding CNN fire her for what she said. At the time, CNN released this statement to Mediaite.

Ashburn did not comment specifically on Loesch, but did admit that a CNN employee making remarks that could be construed as offensive does not look good for CNN. Kurtz noted that Loesch hasn’t been on CNN for a while now, but according to TVeyes, Loesch was on the network as recently as February 6. But Kurtz also brought up the firings of both Rick Sanchez and Octavia Nasr from CNN in the past few years, and asked where exactly is this magical line that no one is allowed to cross when they work for the news network.