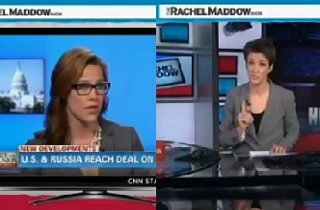 On Thursday night’s episode of The Rachel Maddow Show, famously nice host Rachel Maddow openly mocked former MSNBC The Cycle host-turned-CNN-Crossfire co-host S.E. Cupp for insisting that the President should still bomb Syria, but she did it in the nicest way possible. Or did she? On Twitter Friday afternoon, S.E. responded to Maddow’s criticism, and groused a bit with our own Noah Rothman.

At issue was S.E.’s commentary on last Sunday’s State of the Union, in which she opined that the diplomatic solution to the Syria crisis is “kabuki theater,” and the United States should begin military strikes.

“They’ve been moving chemical weapons,” Cupp said. “Hezbollah probably has them already. This is a farce. It’s Kabuki Theater. And we’re all in for a very rude awakening.”

Fellow panelist Cornell Belcher asked “So we should go and start dropping bombs. Is that your point?”

“Yes, absolutely,” S.E. replied. “We need to put our muscle where our mouth is.”

After playing that clip Thursday night, Maddow repeated the line. “We need to put our muscle where our mouth is.”

“That was a host on CNN,” Rachel said, “a very nice person, she used to work here. A host on CNN volunteering, personally, to go to the Middle East and personally fight in a new American war there. At least, I think that’s what happened at the end there. Play that part again.”

Following the replay, Maddow emphasized the point again. “Our muscle,” she said. “In this case, because I do not think she is enlisting in the Marines, I think this is probably a royal ‘we.’ Another pundit who has a job talking in a television studio, talking tough about a war we ought to be starting, and then volunteering other people, other people’s children, to go fight that war.”

There are two tracks to this critique, substantive and stylistic. On style, Rachel’s attack on S.E. seems, to the naked eye, like the nicest possible way to disagree with someone, but it’s pretty common knowledge that in the political opini-O-sphere, the most blatant demonstration of disrespect is to omit your target’s name. Rachel and S.E. are both very nice people, but have no illusions, this was meant to sting.

The familiar liberal “chickenhawk” attack employed here is valid under certain circumstances, such as with people who actually set policy, less so for those who don’t. In the case of Syria, though, it seems a particularly poor premise, unless those who opposed the use of force prior to the Syrian offer were willing to volunteer their own children to be gassed in their beds.

Better, then, to stick to the substance. S.E. responded to that on Twitter this afternoon. “Yes, Rachel,” she tweeted, “When the President says stuff, it matters. Or are you suggesting he’s irrelevant?”

Mediaite’s Noah Rothman opined, of the suggestion that S.E. was volunteering for action, “@secupp How cheap. At least she didn’t call you a ‘chickenhawk’ Though, that may have been time constraints.”

“Obama really has lost credibility. Even libs are now saying, “Stop holding him to his words! They’re meaningless!” S.E. concluded.

There were, and still are, many liberals who were opposed to the President’s push for airstrikes on Syria, and they were, and are, wrong. There would be no diplomatic solution right now had it not been for the threat of force. However, that diplomatic solution promises a result far beyond what we (and no, I’m not volunteering. Bum ticker) could ever have expected from the sort of strikes that were under consideration. This resolution, if it works out, will be a glorious victory for not bombing, and for peace through strength.

S.E. is right, the President’s words should mean something, but the purpose of military strikes was to be the degradation of Bahar al-Assad’s ability to carry out chemical attacks. What we’re facing now is a situation where we asked for the keys, and the guy offered to give us the whole car. I agree that the credible threat of force ought to remain until the chemical weapons are secure and being destroyed, but it doesn’t make sense to bomb the guy after he has surrendered.

However, I also don’t think there should be a military service test to deliver foreign policy commentary, especially when that test will only ever cut in one direction. If entitled first-world white dudes can casually wash their hands of child mass-murder, then S.E. Cupp can surely give her opinion about air strikes. Judge them on their merits.