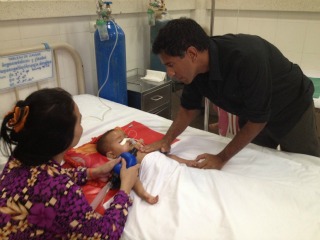 CNN’s Sanjay Gupta is in Cambodia this week, covering a perplexing illness that, to date, has taken the lives of over 50 young children. Gupta, a neurosurgeon, has been talking with local doctors and officials from the World Health Organization in an effort to determine what, exactly, has caused these children to succumb and perish so quickly. Eleven hour time difference be damned, Gupta graciously made time to speak with us about his report and what he’s been able to learn so far.

According to Dr. Gupta, the illness appears to be some combination of an enterovirus (Type 71, specifically) and a second, “mystery” component still being investigated. He explained that these issues manifest in children who “arrived with mild symptoms, were treated and given medicine — bad medicine, or medicine that was inappropriate or wrong.” The issue of patients being given medicine that is incorrect, old, diluted or counterfeit is a widespread one, he noted, and one that poses a real and fatal threat across third world countries and the United States alike.

The sick children first experience “a mild fever, usually without the rash on hands and feet that is commonly associated with the virus, and become increasingly lethargic.” They then develop encephalitis — swelling of the brain — and eventually become comatose.

What is particularly striking about this illness, Dr. Gupta told us, is the speed at which it strikes. “Within 24 hours,” he explained, “the lungs are completely destroyed,” becoming hardened and useless, even with the aid of a breathing tube.

Gupta will be investigating and reporting on this illness throughout the week, speaking to families of the afflicted children, those who have survived, and the doctors and health officials working tirelessly to figure out just what, exactly, is happening. In the picture below, Gupta can be seen speaking to a doctor at one of the Kantha Bopha hospitals, as patients and their families look on. 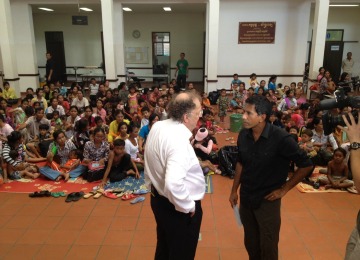 Here’s a look at Dr. Gupta’s ongoing investigation into what, exactly, is making these young children so sick, courtesy of CNN: