CNN’s Smerconish Confronts David Duke over Scalise: Was He There or Not?
video

CNN’s Smerconish Confronts David Duke over Scalise: Was He There or Not? 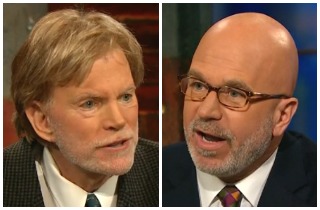 CNN’s Michael Smerconish sat down for an exclusive TV interview this morning with former KKK grand wizard David Duke to confront him directly about whether Steve Scalise attended one of his group’s conventions. Scalise, the House Majority Whip, publicly admitted that in 2002, he attended a white supremacist convention organized by Duke’s European-American Unity and Rights Organization (EURO), which is classified as a hate group.

The man who told The Washington Post he asked Scalise to speak took exactly one day to take it back and say that actually, Scalise didn’t attend the event. So which is it?

That was the question Smerconish posed to Duke this morning. And Duke honestly could not say for sure whether Scalise attended that 2002 conference, saying that he was out of the country at the time and the people he spoke to gave him contradicting accounts.

Duke gave Scalise some words of praise this week, but on CNN he made it very clear that he isn’t a supporter of Scalise’s, nor the other way around. He also reiterated his threat to other politicians that he will out their connections to him if they throw Scalise under the bus.

He also told Smerconish the media is “very racist against European-Americans,” and the interview ended with Smerconish trying to get Duke to say the Holocaust happened. The most he got was Duke acknowledging the “Holocaust” (yes, he made the air quotes).

Watch the full face-off below, via CNN: