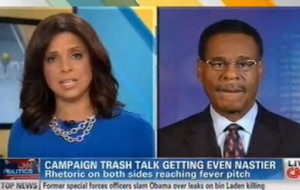 CNN anchor Soledad O’Brien has faced predictable charges of bias from conservatives this week over her use of facts to debunk the Mitt Romney campaign’s claims about Medicare, but on Thursday morning’s Starting Point, O’Brien pressed Rep. Emanuel Cleaver (D-MO) over the possible racial connotations of Vice President Joe Biden‘s recent remarks about Republicans wanting to “put y’all back in chains.”

Perhaps Romney surrogate John Sununu ought to rethink the placement of that Obama/Biden bumper sticker, after all.

There has been a considerable amount of back-and-forth between the campaigns since the Vice President told a Virginia crowd that Republicans wanted to “unchain Wall Street” and “put y’all back in chains,” which many have taken to be a reference to US slavery. President Obama weighed in on the controversy, telling People Magazine “The truth is that during the course of these campaigns, folks like to get obsessed with how something was phrased even if everybody personally understands that’s not how it was meant.”

But the supposedly “biased” Soledad O’Brien wasn’t taking the President’s word for it Thursday morning, pressing Rep. Cleaver on the meaning behind Biden’s words. Cleaver told O’Brien that he didn’t give the line a second thought when he first heard it.

“I would never have even paid much attention to it,” Rep. Cleaver said, “except for the fact that campaigns nowadays are waiting for any kind of little nugget to try to create an atmosphere of more and more discord,” adding that the sound bite “is now being used to make Vice President Biden appear to have been throwing out these words in order to somehow attract dumb African-Americans who, if they hear the words ‘chains,’ are going to automatically vote for him and President Obama.”

“I think you’re extrapolating on the ‘dumb African-Americans part of that,” Soledad responded, then zeroed in on the subtext. “You cannot tell me that if we were talking about Mitt Romney saying a line like that, and if we were discussing that and the quote was he wants to ‘put you all back in chains,’ and that was part of Governor Romney’s speech, that people would not go crazy and crying about race and talking about tone and tenor and coded language. I think we would, wouldn’t we?”

Cleaver responded that it “depends on the context,” and asserted that there was only a “sprinkling of African-Americans there.”

“Let me stop you for a second,” O’Brien interjected. “People who were there said the audience was divided similarly to how danville is divided. Roughly 50-50 is the demographics in Danville, white to black. That’s what we are told was the makeup of the crowd as well. Roughly half that crowd was African-American.”

She also called Rep. Cleaver out over past statements, saying “When we talked, back in June, you were talking about ‘I think it has some kind of a smell to it,’ talking about contempt charges for Eric Holder. You said back in May there was a concern about ethics probes of black lawmakers. You were speaking about codes. There’s nothing spelled out but we have a concern. Yet it seems to me like everybody turns the other way when similar things could be highlighted here.”

Whether or not you agree with the comparisons that Soledad O’Brien makes here, this interview i clearly not the work of a biased journalist, as right-wing whining suggests, but of a journalist who applies her own well-formed judgments fairly and evenly. O’Brien has done a lot of reporting and commentary on issues of race, and here, she deployed her expertise on the subject to conduct a tough, thorough interview.

A fair interpretation of Joe Biden’s comments (and the one I made) is that he ad-libbed that line as a way to complete his Wall Street metaphor, while also reminding the audience (even the white people, who, believe it or not, also care about social justice) that Republicans haven’t exactly been friendly to black people, or the first black president. Even if you buy into the notion that Republican policies are better for everyone, including black people, their consistent demonization and exploitation of racial resentment can fairly be seen to outweigh that consideration.

In context, it was a clumsy non sequitur, and a trivialization of slavery, but what folks who ask what would happen if Romney made a similar remark don’t get is that Joe Biden and the modern Democratic Party have earned some benefit of the doubt that Republicans, particularly Mitt Romney, have not. If Biden owes anyone an apology, it certainly isn’t the people who are most loudly campaigning for one.