CNN’s Stelter: Media May Have ‘Overreacted’ to Boston Bombing, Cites ‘Low Number of Deaths and Injuries’ 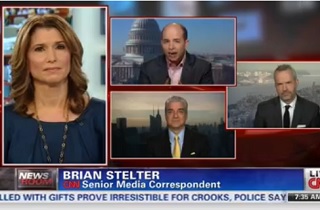 During another of the incessant end-of-year recap segments on cable TV these days, CNN Reliable Sources host Brian Stelter delivered what he felt would be “an unpopular opinion” to CNN Newsroom host Carol Costello Friday. In a discussion of the media’s coverage of the Boston Marathon Bombing, Stelter said “I wonder if there was an overreaction in the press, considering the relatively low number of deaths and injuries.”

The segment was pegged to partisan bias, with Newsmax‘s Steve Malzberg arguing that the media tried to downplay the involvement of radical Islam as motive, and Media Matters‘ Eric Boehlert reminding the panel of the rush to judgment that caused innocent people to be smeared in the press by the likes of the New York Post and Glenn Beck. Stelter, though, ventured far afield of the premise to offer what he acknowledged “might be an unpopular opinion.”

“I wonder if the press, overall, in retrospect, overreacted to the attacks in Boston,” Stelter said. “It was a very scary week. I was scared, along with the rest of the country. In retrospect, I wonder if there was an overreaction in the press, considering the relatively low number of deaths and injuries, whether it was taken out of proportion, given all the other violence we see all the time.”

He concluded, “Because the word ‘terrorism’ was applied, I think there may have been an overreaction.”

Stelter’s comment contains a kernel of truth, in that the entire point of terrorism is to asymmetrically multiply the psychological effect of violence, but that doesn’t mean the coverage was unwarranted, or that the fear was illegitimate. The bombing was captured on video, and the suspects remained at large, and continued to kill, for several days thereafter.

Where he really ran afoul, though, was in basing his conclusion on a cold calculation about the casualty count. Three people were killed in the bombing, and 264 were injured, but these were not hangnails or faintings. People had their limbs blown off. There is nothing about this attack that a reasonable person could argue means it was covered too much. There were media overreactions, but they weren’t to a low body count, they were to things like a dog barking, and they were caused by a need for constant, feverish activity to fill every second of every day.

What’s also interesting is Stelter’s reaction to Eric Boehlert’s remark about Glenn Beck. In this familiar cable news play, the roles of lefty and righty partisans were played by Boehlert and Malzberg, with Stelter filling the role of the “objective voice of reason,” but when faced with Beck’s reckless and false speculation about a Saudi national who was completely cleared of any wrongdoing, all Stelter can manage to say is that “places like Media Matters reminded us that Glen Beck seemed to be wrong about that one.”

“Seemed to be wrong?”

That’s a bit like saying “Water seems to be wet. Today.”

Where this segment, and media criticism in general, goes wrong is in focusing on the “bias” angle, instead of on the more serious problem of just plain bad reporting. In an act of pure generosity, none of the panelists brought up CNN’s own disastrous reporting of a “dark-skinned” suspect with “brown skin” who was definitely in custody, until he wasn’t.

Partisan bias is an interesting topic, but it shouldn’t eclipse the reason journalism is supposed to exist in the first place: to truthfully inform the public, in the public’s interest. The Boston Marathon Bombing, and this segment in particular, prove that the “view from nowhere” can be as toxic to the truth as anything else.